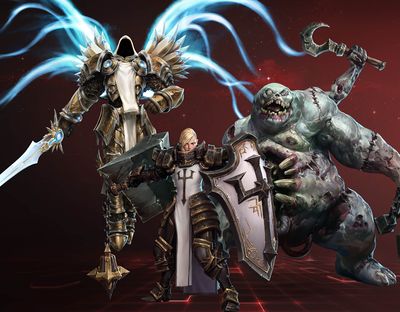 From left to right: Tyrael, Johanna, and Stitches.

Warrior heroes are a strong and tough role of heroes. They often have ways to stun or bodyblock the enemy from reaching their allies, and are often very tough themselves. Most warrior heroes should protect their allies. With the Caldeum Complex event, heroes in this role went into either Bruiser or Tank category.

In addition to damage mitigation and healing abilities that sustain them in fights, many warriors also have roots, stuns, or pulls, which can disrupt opponents. To be as effective as possible, Warriors will need to be patient in the execution of these control-abilities. Because Warriors are often relied upon to initiate team fights, they'll want to be aware of the location of their teammates at all times. Warriors who charge in too early may lack the back-up they rely on to survive a fight. Conversely, engaging too late may give opponents a window to annihilate squishy allies, like Assassins and Supports.

There are different playstyles Warriors should adjust to depending on your team's Hero composition. For example: Artanis and Sonya can act as Bruisers, front-line heroes who may lack the same amount of CC as other Warriors, but accent their tank with damage and pressure (and more health than most heroes). Team compositions with smaller health pools but consistent damage output will typically benefit from a 'peel' playstyle, meaning that tanks will need to attract attention away from their backline assassin and support allies. Alternatively, compositions that prefer to dive aggressively will need their warrior to charge in with the team and remain there until the targets are subdued, the objective has been captured, or the team needs to retreat.