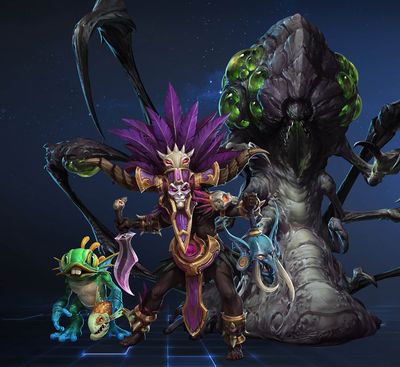 Specialist heroes do various things that aren't covered by other roles. Specialists can be siege heroes that do massive damage to enemy bases and towers, but some can have completely different effects on the flow of battles. With the Caldeum Complex event, this role was completely removed, with its Heroes being moved to other roles.

Specialists are usually the "wild card" factor for the team, as they tend to have very unique, untraditional styles of gameplay. Specialist heroes can have a sharp learning curve, as they often approach battles in a vastly different way than the other roles. A specialist can be a deadly team-fighter, a diehard split-pusher, or a hybrid of the two.

As a Specialist, you'll want to identify what your goals are going into a match and adjust your playstyle accordingly. For example, Abathur can be played almost exclusively as a lane pusher, focusing on empowering his Locusts, and taking down enemy structures. Conversely, he can focus on employing his Symbiote ability; “hatting” his allies to assist them during battle.

It is this flexibility that defines Specialists, allowing them to thrive and bring their own flavor (a fishy flavor... in Murky’s case) to the fight. As always, remember that communication is key to victory! Be sure to give your teammates a heads-up about your plans if you're looking to split-push, and be willing to assist with team fights and objectives if your allies need help.