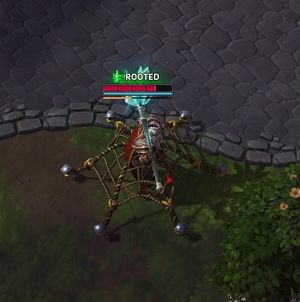 A Root is a debuff that causes the affected unit to be unable to move or use any movement abilities. Rooted units are still able to use other abilities and basic attacks. Getting Rooted during a dash-based movement ability instantly ends it.

According to Senior Game Designer MattVi, one thing Blizzard has to be careful about when using Root effects is that they clear the target's Move orders. This can feel super awkward as an enemy if you don't realize you were hit by a CC (why did my Hero stop moving?), and is the reason that the existing Root effects tend to be on very visually distinct, noticeable abilities. Blizzard sometimes opted to do a very large Slow instead of a Root in places where this felt problematic. To some extent the reduced effectiveness of Slows on high-mobility heroes (like Tracer) is important because they're dependent on their mobility, but you raise a good point that their relative value is affected by the prevalence of Slows.[1]