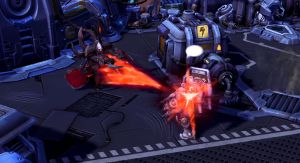 Crowd control (commonly shortened to CC) is a category of negative effects that remove or diminish the control a target unit has over aspects of itself – aspects such as being able to cast spells or initiate movement commands. impair the control of auto-attacks, abilities, targeting of units and/or movement of affected units. Effects that silence, stun, or sleep are all examples of crowd control. As crowd controls impact a unit's combat ability, they are essentially more specialized forms of debuffs – however, this ability to directly hinder a unit's ability to fight means that crowd controls are often given significantly more importance in regular gameplay than normal debuffs, resulting in their special classification.

Most forms of Crowd Control can removed by becoming Unstoppable.