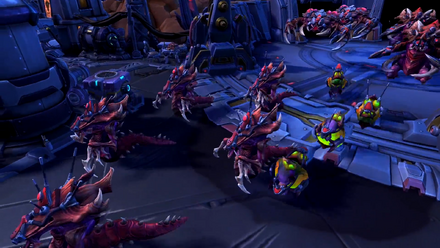 The Zerg Wave is the main objective of Braxis Holdout. A Zerg wave consists of zerglings, hydralisks, banelings, guardians, and ultralisks.

The United Earth Directorate used the remote and hostile planet Braxis to conduct experiments on ways to turn the Zerg swarm into a weapon they could unleash on their enemies. Though the main psi disrupter was destroyed, this space platform's beacons remain fully operational and ready to be used. Capture the beacons and watch what happens when a flood of weaponized Zerg ravages the battlefield.[1]

Braxis Holdout is a two-lane map, with two beacons located in the center and two Zerg holding pens located in each lane, one for each team. Periodically, the two beacons and one pen from each lane (belonging to opposite teams) will activate. When both beacons are held by the same team, that team's pen will begin to fill with Zerg. When one team's pen is full, the Zerg are released to attack down their respective lanes.