Players have the option to join voice channels in order to communicate with other players. Voice Communication became available to players in Heroes of the Storm in early 2018. Whether in a draft lobby, partied with a friend or two, or with the whole squad in Team League, voice communication frees players' hands from typing and make it easier to coordinate with teammates.

By default, all players must opt-in to join the team voice channel at the start of a game or upon entering a draft lobby. A notification will appear in chat to remind players that team voice is available, and they can click it to easily join the channel. Keep in mind that voice channels—-even party voice--are completely optional. Players can use the voice chat tab in the options menu to adjust auto-join settings and notification sounds. 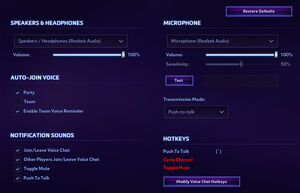 Players can click the dropdown menus at the top to pick which device they'll use to hear their allies' voices and set up the microphone they'd like to use. Players can click the Test button to hear how they'll sound to teammates in-game. However, even if players don't have a microphone, they can still join party and team voice channels to listen in as allies make plans and shotcall.

Checkboxes under Auto-Join Voice and Notification Sounds on the left side of the voice chat options menu can be used to select which voice channels players would like to join automatically during each game, as well as enable or disable voice notification sounds.

The Transmission Mode dropdown determines whether the microphone is set to Push-to-Talk or Open Mic. When using push-to-talk, allies will only hear a player's while that player is holding down the push-to-talk hotkey (the ` key by default). With open mic, they'll hear everything. If players do opt for an open mic, the sensitivity slider can be adjusted to stop the microphone from transmitting sound under a certain volume.

In addition to push-to-talk, players can set up hotkeys to quickly switch between party and team voice channels, or to turn the microphone on and off.

Outside of the voice chat options menu, a voice widget is found in the top-left corner of most game menus. Clicking will allow players to quickly join, switch, or leave a voice channel. Once players enter a game, the widget appears on the tab screen.

Microphone and speaker icons can be found across from player names on the tab screen, which can be clicked to mute or unmute allies individually.

A reporting option is available called Abusive Voice that can be used to report players specifically for misbehavior over voice. Additionally, a voice silence penalty exists that’s separate from chat silence penalties. This means that players who are frequently reported for Abusive Voice can receive a voice silence, which will prevent them from speaking in team voice for the duration of that penalty. They can, however, still join the team voice channel to listen to allied comms, and can still join and use the party voice channel normally.