From Heroes of the Storm Wiki
(Redirected from Unrevealable)
Jump to: navigation, search 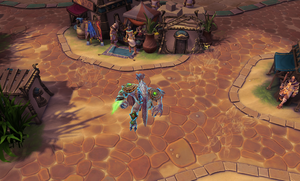 A stealthed allied Zeratul surrounded by an enemy Nova, Samuro and Valeera

Stealth is a hero ability that makes the hero nearly invisible.

Stealth heroes are not completely invisible, as faint distortion shader can be seen at their location. Stealthed Heroes are hidden on the minimap and untargetable by direct abilities and Basic Attacks. Some abilities grant stealth for an unlimited duration while others have a limited duration stealth. Stealth is cancelled by attacking, using an ability, channeling a map objective or upon taking damage.

If a stealthed Hero remains immobile for a short amount of time (1.5 seconds) they will become "Invisible" and will not display any outline or visual effect until they move again or are revealed by dealing or taking damage. This includes Heroes under the effects of temporary Stealth effects such as Samuro's Windwalk or Tyrande's Shadowstalk. To avoid some bad gameplay situations, there are a couple of exceptions to this mechanic: Heroes cannot become Invisible while occupying a capture point, such as Braxis Holdout or Mercenary Camp Beacons - instead, they will retain normal Stealth visual effects.

As the Balance team currently sees it, the purpose of Stealth is:

While cloaked heroes cannot be targeted, they can be hit by Skillshots, Area of Effect abilities and splash or cleave damage. Being Revealed while in Stealth reveals the hero and allows it to be targeted, but doesn't break the stealth or cancel any bonus effects given to the hero while normally in Stealth. Bouncing or chaining abilities (like Thralls Chain Lightning, Sylvanas' Shadow Dagger, etc.) bounce also to stealthed targets that are outside allied vision.[2]

Before, "Unrevealable" is a state that exists where you cannot be broken out of stealth, but the enemy can still see your stealth shimmer. This mechanic exists on several Heroes, namely Valeera and Samuro, when they first enter their stealth states. 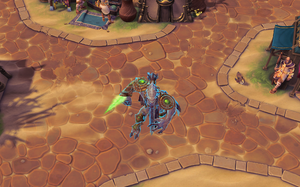 The old stealth effect: A stealthed allied Zeratul surrounded by an enemy Nova, Samuro and Valeera

As part of the 2018 Gameplay Updates, the Developers made significant changes to how Stealth works in Heroes of the Storm. Before the rework, the stealth shimmer visual was extremely hard for a significant number of players to see, and was ultimately just an eye test for the opposing team. Previously, if the opposing team could quickly spot the enemy stealthed Hero, they gained a significant advantage while the stealthed Hero was left with very few options for counterplay. On the flip side, against a team that consistently failed to spot the shimmer, stealth Heroes could dominate the match and force players into a very passive and not-entirely-fun playstyle. Due to this, there was also a large disparity in the power level of stealth Heroes at different ranks of play. In uncoordinated Quick Match games, stealth was king. However, in high-level ranked play and esports, stealth Heroes were much weaker and hardly ever seen. With this change, the Developers wanted to shift the power away from that ‘eye test’ and encourage more strategic use of stealth.[3]