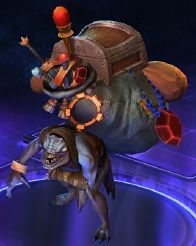 Heroes! The Nexus has been infiltrated by scores of miscreant goblins. They prance and frolic throughout, hauling large sacks of stolen gold. This will not stand. Daily quests have been posted, demanding that the Nexus’ denizens slay the dastardly looters on sight. Remember, the first goblin kill of the day will net some gold for your purse. Happy hunting!

Treasure Goblins are small demons from the Diablo universe.

Treasure Goblins are small demons that steal loot and everything that glitters, carrying said treasure in sacks over their shoulders. They are servants to the baroness Greed, and they enter her domain from the mortal realm through portals.[1]

Treasure goblins appeared in the start area of any group containing a player who had not yet completed their daily treasure goblin quest, but each player could only complete the quest once per day. The appearance of the treasure goblins was narrated by Deckard Cain, from Diablo.

With the August 18, 2015 patch, a second special quest appeared, rewarding players who killed a further 50 treasure goblins with a special Treasure goblin Portrait.[2]

According to a counter on the official site, the Eternal Conflict event saw 15,193,660 treasure goblins killed by players.[3]

As a mount[edit | edit source]