From Heroes of the Storm Wiki
(Redirected from Talents)
Jump to: navigation, search 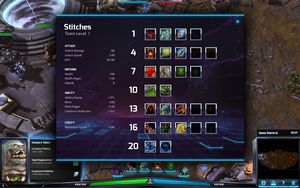 In Heroes of the Storm, every Hero has their own diverse kit of skills and abilities that players will be able to choose from as their team advances. Starting at level 1, every few levels a team earns will present players with a set of talent choices that offer new tools or enhance existing abilities. In Heroes of the Storm, talents have replaced what many may have come to know as the item shop. These talents allow players to react to the battleground, team composition, or the opposing team composition. A Hero's kit is unique to them, and offers different strategic opportunities to employ during the battle.

Pressing the TAB key brings up a menu where players can see which talents their team and their opponents have chosen. As players gain familiarity with the talents that are available to each hero, they’ll make better and more informed decisions about how to react to the ever-evolving battle at hand.

The levels of the talents are levels (1/4/7/10/13/16/20). At level 10, each member of the team will select from one of two powerful Heroic Abilities (R) which greatly enhance their Hero’s effectiveness in battle, which can be upgraded with certain talents at level 20. When unleashed in succession with other complementary Heroic abilities that their team has chosen, these can be absolutely devastating against opponents. Once the Heroic ability has been selected, the choice cannot be undone. As such, having a keen understanding of the talents and abilities for each of the Heroes is paramount to achieving success in the Nexus.

Certain talents on a hero may be picked in order to counter the choices of players on the enemy team. Once a talent is chosen, the change cannot be undone, so choose wisely!