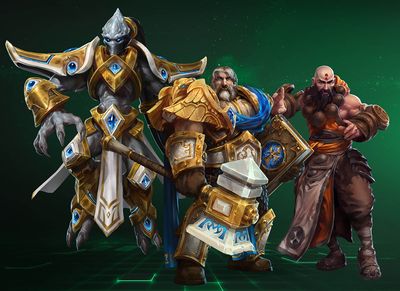 Support heroes are known for keeping their team alive through buffs, heals and shields. Supports can stay close to friendly heroes and allies and keep them alive. With the Caldeum Complex event, this role was reworked; current healing heroes were moved to the new Healer role and other heroes that provides Shields were moved to this role.

The Support role acts as a potent backbone to the team's efforts in the Nexus. In addition to mitigating damage and offering heals, Support heroes also have powerful buffs and control spells at their disposal. Supports are divided into two sub-roles: healers, who focus on restoring allies' health, and Semi-Supports, who rely on providing utility.

For most Supports to be effective, they'll need to stay close to their teammates during fights – ideally, behind a Warrior who is tanking the damage. If you are a healer, it’s your job to keep the team as close to their full hit points as possible. Since Warriors' high health pools will give you some breathing room, you'll often need to focus heals on your damage dealers, especially those who have jumped into the fray. Alternatively, if you are a Support hero that focuses more on utility, find ways to use your disrupts or stuns so that your teammates can immediately capitalize on them.

For example: If you're Malfurion, and an allied Stitches uses Hook to pull an enemy in close, you can use Entangling Roots to keep that enemy locked down while your teammates obliterate them.