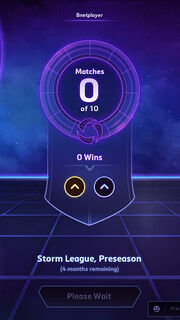 Fight alongside (and against) the best of the best solo, or bring friends in a party of up to five players and storm the Nexus together.

Storm League is the Ranked Play game mode that allowes players queue up to play with (and against) other players similar skill who are going it solo looking for a challenge.

It may be tempting to jump straight into Storm League, but before you do that, you should learn about one more thing. How you pick your hero in a ranked game follows different rules from Quick Matches. Instead of just selecting your favorite hero and clicking "Ready", both teams go through a selection process called a Draft. Each side takes turns banning and picking Heroes until 10 Heroes (5 for each team) have been selected. Once the draft is complete, the match begins.