From Heroes of the Storm Wiki
(Redirected from Singularity Shell)
Jump to: navigation, search 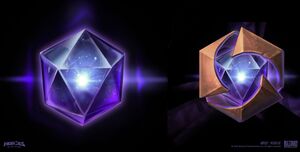 Every Realm within the Nexus has one stone called a Singularity. Claiming it will make you the Realm Lord and grants you an almost demigod-like status[1], but not immortal.[2]

The power a singularity provides its realm lord is tightly tied to that individual. A singularity has a kind of intelligence that binds it to the one who has control; they aren’t mere objects that can be stolen or passed along. They must be achieved through conquest. Anyone who isn’t a realm lord can’t even corporally connect with one.[2]

If a Realm dies through chaos, destruction or war, the Singularity also dies. All that remains from it is a "Singularity Shell".[3] During the course of a massive war between the fractured forces of the realm of Iresia, they destroyed themselves and shattered their universe's singularity, which they referred to as the "mother crystal".[4] Qhira is now a holder of a singularity shard from Iresia.