From Heroes of the Storm Wiki
(Redirected from Sapper Minion)
Jump to: navigation, search 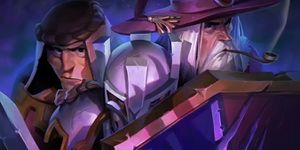 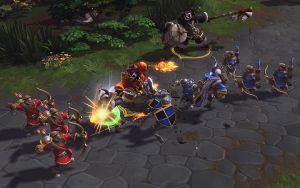 Minions are the basic ground troops of each team. Minions in some battlegrounds have different models to match the battleground’s theme, but their name and purpose is still the same. Small and fairly weak computer-controlled characters, Minions spawn every 30 seconds from the Core in waves, and proceed across the Battleground in their appointed lane attacking the first enemy they see. Minions may be melee or ranged. Without support, minion waves will clash about evenly. Minions' starting HP and damage gradually increases as the game goes on, and they are the prime source of XP in the game. Every minion wave is worth 452 total XP, increasing every 2 waves 11 times. The first 5 minion waves gives more XP than a takedown and more than Towers, so their experience should be soaked strategically.

Minions will attack enemies whenever encountered, preferring enemy Minions over Heroes or Structures whenever possible. It is therefore generally advised when facing enemy minions or Structures to keep friendly minions within range, allowing them to serve as tanks, soaking up attacks and leaving the player free to deal out damage or otherwise support their team. This is especially important when facing enemy Structures such as Towers, which may otherwise decimate Heroes in seconds. Additionaly, Minions do 300% damage to structures.

Minions serve as each team's cannon fodder, soaking up damage and slowly wearing down the enemy team. While their basic charges are precisely counterbalanced by the opposite team's minions, by assisting them, players can turn their minions into a useful shield and/or battering ram with which to overwhelm the opponent's defences. Mercenaries can also bolster minions' effectiveness, allowing them to make good progress without direct assistance.

Enemy minions give Experience (XP) when they die while a hero is in range, or when a hero's attack kills the minion. Experience is shared amongst the entire team so everyone levels up together. This is why it is important to soak all lanes to gather as much experience as possible. You can also deny experience by zoning your enemy away from the minion battle.

The vision minions provide (radius 8) is also essential for controlling the map. While your lanes are pushed up, the enemy team cannot rotate without your knowledge. This enables you and your team to move more freely and make more aggressive rotations.

Minions have also level up after every minute. But not only their Health and their damage increases, the experience they reward to the enemy increases as well. The value is saved in every minion instance when it spawns at the Core and does not change during the life time of the minion. Since every 30 seconds a new wave of minions spawns, every second wave, starting with the one spawning at the one minute mark, receives better stats including a higher experience reward.[1] Minion scaling is important because structures do not scale, so large, uncleared minion waves are more of a threat to structures as game time increases.

A minion wave contains one Leader Minion (also known as Wizard Minion). He has moderate damage but the lowest HP out of the minion wave. When that minion is killed, it will drop a Regeneration Globe that restores health and mana.

Catapults are ranged minions that fixate on their targets. (Once locked onto a target, Catapults do not change targets; they acquire a new target only after destroying the primary target.) When a team destroys a Fort, they’ll gain a Catapult in every 3rd Minion wave. This allows consistent (but not constant) pressure in a lane that enemies will have a hard time ignoring. This is also a form of snowball prevention that is not as obvious — a team that’s ahead will have more pressure in lanes, pushing Minions (and Experience) towards their opponents, allowing them easier and safer ways to regain a foothold in the match. Killing a Keep will result in Catapults with every wave.

In order to keep early-game Catapults from being too devastating to defending teams, Catapults gradually increase the size of their area attack (from 1.0 to 1.5), attack range (from 11 to 13), and damage/health as the game progresses. Late-game Catapults do high amount of damage and outrange the enemies' Forts, Keeps and the Core.

Catapults do not spawn on Alterac Pass and Towers of Doom.

Reavers are melee minions, replacing Catapults on Alterac Pass. Similar to Catapults, they spawn in a lane once the enemy fort and keep in said lane has been destroyed, but lead the wave from the front. Reavers do significantly less damage than catapults, lacking both the area damage and the bonus versus structures. However, Reavers make up for their lower damage and melee range with massive health pools and significant armor against structures (75) and minions (50), further extending their life totals.

Sapper Minions once spawned only on Hanamura in a lane together with Minion waves when the enemy Fort and Keep in said lane have been destroyed. This Sapper Minion put intense pressure on the enemy; if it reached the end of the lane, it dealt 1 Core damage. Sapper Minions were removed on July 11, 2017.