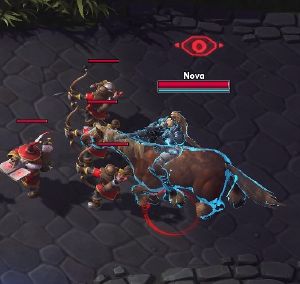 Revealed is a debuff that allows players to see enemy heroes, even if the target is out of sight, cloaked, within or behind a bush. This is indicated by a "red eye" hovering above the enemy hero. Revealed also reveals clones from real units (like Samuro's and Nova's decoys). The clones lose color, becoming clear, almost like vapor. Heroes that are Unrevealable are immune to this effect.

Revealed is most commonly applied by the Core, Forts and Keeps with the ability True Sight, which passively reveals everything around those structures.