From Heroes of the Storm Wiki
(Redirected from Rare Loot Chest)
Jump to: navigation, search 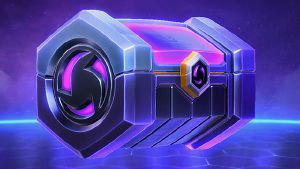 Loot Chests are packages containing random assortments of nearly every reward in the game, including Heroes themselves.

They contain four random items, including alternate skins, banners, emojis, voice lines, sprays and Loot Chest-exclusive items. In addition to regular Loot Chests, Rare and Epic Loot Chests can also be acquired. Each chest type is guaranteed to award at least one item of that Chest's rarity level or higher, though even standard Loot Chests have a chance to contain Rare, Epic, or Legendary items. Loot Chests are also available for purchase via the Buy button on the Loot page in the game's menus, but they cannot be purchased in the out-of game Shop which is could be accessed in the Blizzard Desktop App. [1]

Rare Loot Chest can be purchased with Gold.

For every 10 levels earned with the same Hero, a Hero-specific Loot Chest will be acquired, guaranteed to contain at least one item for that Hero. New items will be regularly added to Loot Chests, so there will always be exciting new drops to look out for when opening chests. Chests can be re-rolled using gold up to a maximum of three times, but be aware that every time a chest is re-rolled the rarity of the items in the chest will also be re-rolled. This means that if there is a legendary and/or an epic the first time a common chest is opened, there is no guarantee (and frankly it is extremely unlikely) that if the chest was re-rolled three times you would find another legendary and/or epic. Starter chests always contain a hero and a 7 day stimpack, however they cannot be re-rolled.