Ragnaros, the Firelord, is a melee bruiser hero from the Warcraft universe. Ragnaros is a powerful bruiser who can sow the seeds of destruction in a team fight or simply when defending his team's forts. Ragnaros is a unique addition to the Nexus hero pool thanks to his ability to take over allied forts or destroyed forts with his trait, Molten Core. Seizing control of a fort grants him a new set of abilities that allow him to defend against the enemy's siege or lay waste to an enemy town in an allied push.

Ragnaros is a bruiser that can nullify enemy pushes against his forts and keeps.

This section concerns content exclusive to the Warcraft universe.

Ragnaros is the Elemental Lord of Fire - like a flame, his only desire is to watch everything burn. The Firelord and his brethren once held sway over the entire world. As a servant of the Old Gods, he fought against the Titans for domination over the planet. The victorious Titans banished him and his brethren to the Elemental Planes — there to remain imprisoned until the end of time. It was then and there that the elementals turned on each other. For five millennia a battle was fought at the core of this world, with Ragnaros biding his time in the Firelands.

Ragnaros returned to the surface when the Dark Iron clan, in a desperate attempt to fight back against the other dwarven clans, summoned him into Redridge. His emergence permanently scarred the land and created the volcano known as Blackrock Mountain. Ragnaros swiftly proceeded to enslave the Dark Iron clan, and remained inside the Molten Core of the volcano to gather his strength. Now, he has turned his fiery gaze toward the Nexus in his quest to bring about the end of days by purging all life in flame and ash.

Harness the volcanic wrath of the Firelord to call down flaming meteors, crush foes with the explosive might of Sulfuras, and summon lava waves that will incinerate an entire lane's worth of enemy minions. When faced with a counter-attack, Ragnaros can empower a fort or keep, becoming a towering inferno over the structure and gaining a second set of abilities that will help you engulf assailants in the fires of doom. Ally yourself with Ragnaros to bring about a new era of destruction in the Nexus and show your opponents the true meaning of the words "raid boss".[1]

Ragnaros is a Bruiser that can nullify enemy pushes against his Forts and Keeps.

See Data page for a table of scaled values at key levels.

Q
Empower Sulfuras
25 Mana Cooldown: 4 seconds
Ragnaros's next Basic Attack is instant, dealing 191 Ability damage in an area, and heals for 20% of the damage dealt. Healing doubled versus Heroes.

W
Living Meteor
60 Mana Cooldown: 12 seconds
Summon a meteor at the target point that deals 68 damage, then rolls in that target direction dealing 272 damage per second for 1.75 seconds.

Sulfuras Hungers
❢ Quest: Every time you kill a Minion with Empower Sulfuras, its damage is increased by 1, up to 30
❢ Reward: After killing 30 Minions, increase its damage by an additional 90.
Type: Bonus damage
Scaling: -
Affects: Ability

Fire Ward
When Living Meteor hits an Enemy Hero, you gain a charge of Spell Block, reducing damage from the next enemy Ability against you by 50%. Can hold up to 2 charges.
Type: Defensive damage modifier
Affects: Self
Properties: Spell Block

Hand of Ragnaros
If Empower Sulfuras hits at least 2 enemy Heroes, it restores 10 Mana and its cooldown is reduced by 2 seconds.

Molten Power
Each enemy hero hit by Living Meteor increases the damage of your next Living Meteor by 20%, up to a maximum of 100%.
Type: Offensive damage modifier
Affects: Ability

Sulfuras Smash
Cooldown: 60 seconds
Hurl Sulfuras at the target area. It lands after 0.75 seconds, dealing 250 damage. Enemies in the center take an additional 594 damage and are stunned for 0.5 seconds.

Lava Wave
Cooldown: 120 seconds
Release a wave of lava from your Core that travels down the targeted lane, dealing 240 damage per second to non-Structure enemies in its path and instantly killing enemy Minions. Damage increased by 100% versus Heroes.
13

Tempered Flame
When Blast Wave damages an enemy Hero, you gain a Shield equal to 100% of the damage dealt for 3 seconds.
Type: Shield
Scaling: -
Affects: Self

Flames of Sulfuron
Sulfuras Smash Slows enemies by 50% for 2.5 seconds and enemies in the center are Stunned for an additional 1 second.
Type: Crowd control
Affects: Enemies
Properties: Slow

Lava Surge
Lava Wave gains an additional charge and its cooldown is reduced by 30 seconds.

Heroic Difficulty
Your Health and damage are increased by 25% while in Molten Core, and its cooldown is reduced by 50 seconds.
Type: Offensive damage modifier
Affects: Ability 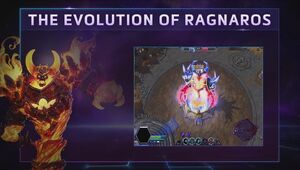 Ragnaros as a Core

Ragnaros was an immense challenge for the Heroes of the Storm team. They wanted a hero that can manipulate the battlefield, and one of the very early prototype ideas was having Ragnaros replace the core. He had a global set of abilities and these abilities would allow him to rain destruction from the sky with meteors, send lava waves, throw Sulfuras into the air - a lot of the abilities you actually see on his kit today, but he also had the ability to summon a Son of Flame. The Son of Flame was controllable by the Ragnaros player and gave him a lot of his team presence. However there was an overwhelming amount of feedback from our their team saying: "I don't feel like Ragnaros". The first problem was that the players were controlling that Son of Flame the majority of the game. That was kind of the avatar they saw, that was the hero they were playing. Number two, the only time you ever saw Ragnaros was when you were losing. He was a stationary core hero, so you never saw him except for his global abilities, and that felt horrible.

The next idea was to give Ragnaros the ability to submerge and move the core. Jade Martin explained: "As you can imagine, this is a terrible idea. Terrible. There are so many things wrong with this. I mean, What gets left behind when he moves the core? The team realized that this wasn't going to work as many problems came up with it (like "Is he invulnerable?", "Is he taking actual core damage?", "Does he move away other heroes in that space?", "Can he block that space?")." So they cut the idea, but they did learn something from it: It was really cool to see Ragnaros in the battlefields despite all the problems it caused, and they wanted to chase that fantasy of the raid boss being summoned in. Finally the idea came up that he could take over forts and keeps. They knew the space is large enough, he's not just showing up in random chokepoints, and forts and keeps are all over the map.

The next idea was to summon Ragnaros on those chokepoints by Majordomo Executus, who actually did it in the Molten Core raid. Majordomo got a set of abilities, but his primary goal was trying to summon in Ragnaros. The developers took this to the test team and the feedback was: "I still don't feel like Ragnaros, I love playing as the raid boss, it's cool when I summon him in, but when I lock-in Ragnaros as my hero, I don't want to play as Majordomo."

The final idea was "What if we just let the player play as Ragnaros the whole time?" So he has that hero form, and then the Molten Core form. The hero form is kind of like his weakened state. He is not quite as powerful, but when he takes over that fort, he becomes this gigantic raid boss that enemies fear.[2]