From Heroes of the Storm Wiki
(Redirected from Protect)
Jump to: navigation, search 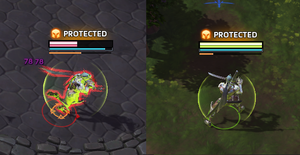 Genji using Deflect to protect himself

While a Hero is Protected, Abilities against the Hero will still hit the Hero, meaning that their additional effects are applied and progress for hit-based quests, like Kael'thas' "Convection", is rewarded normally. Additionally, due to the damage prevention mechanic being "absorbing" (not to be confused with Absorbing) rather than "nullifying", Abilities that hit Protected targets will still count as doing full damage. This allows the attacker to lifesteal or gain progress for damage-based quests, like Jaina's "Frostbite", by using Abilities against Protected targets, even though the target takes no damage. Damage absorbed by Protected status is calculated after Armor reductions.

Basic Attacks and Abilities that deal Physical damage, however, will not hit due to Evasion. This means that Attack Modifiers from Basic Attacks will also not be applied.

Unlike Invulnerable, Protected does not make the Hero untargetable by enemies or immune to crowd control effects, like Stuns and Silences.