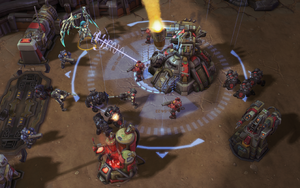 Although all maps of Heroes of the Storm have the same overall goal of destroying the enemy Core, a specific and unique objective will help with the goal of destruction. Objectives can either be collecting doubloons to bribe a ghostly pirate or capturing tributes to curse enemies. Often, play on the map revolves around the prevalence of these objectives alongside the usual side objectives, and they are usually devastating in effect. Team fights are usually forced during those objectives as it is likely that you will meet the enemy team while going for the same objective. Because of enemy interference, most objectives are essentially impossible to complete alone so bring allies. With allies, not only can you ensure successfully completing the objective over the enemy but your team can also kill some of their players.

Battleground objectives are central points of conflict, where teams create advantage and opportunity for themselves. Whether it’s the Raven Lord's Curse, which greatly weakens your opponents' minions and structures, or cannon fire from Captain Blackheart's ship, objectives shouldn't be disregarded.

The objectives are powerful assets that can help a winning team to bolster its lead, or offer a team that's trailing an opportunity to catch up. As they are so important to the course of battle in the Nexus, objective locations are typically where you'll find team fights happening. Make sure to listen for objective callouts from Battleground announcers, and keep an eye on your minimap to spot their locations.[1]