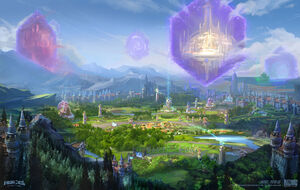 Powerful warriors from Azeroth, Sanctuary, the Koprulu sector, and beyond have been sucked into the Nexus. Stranded in a strange limbo of clashing universes, these heroes have but one fate—endless battle for glory, survival, and just plain fun.[1]

The Nexus is a transdimensional cosmic[2] storm, and the setting for Heroes of the Storm.

The Nexus is connected to other universes, and exists at the center of a cosmic storm. This storm is full of energy and can rip worlds and universes in and out of existence - and it can also pull worlds into stability. Some of the central realms in the Nexus are examples of these points of stability. Places like Cursed Hollow, Haunted Mines, Dragon Shire are Nexus-generated. These Nexus-generated realms each have a leader — a Realm Lord. The Raven Lord, for example, is the Realm Lord for the Raven Court. Realms themselves contain power, and that power is achieved and contained through conquest. Whoever can control a realm receives access to a powerful stone a "Singularity". Those Singularities grants the Realm Lords an almost demigod-like status. Heroes — the characters we play — are essentially wildcards in their game. They’re agents of change that can either ally with certain interests, or defend other interests altogether.[3][4]

The Nexus has many realms,[2] each apparently quite separate from each other. Known realms include the many battlegrounds,[2] and the more technological staging area seen during the introduction. "The Nexus" may be used to refer to the total collection of realms, the cosmic storm itself, or the hidden power which appears to control all activity within it.

The different Realms of the Nexus

The Nexus is able to gather characters from across dimensions, and time. However, it is unclear whether these characters are therefore no longer present in their own main timelines. Raynor is seen during the introduction leaving his previous location. However, since some of these figures have already died, the Nexus may represent an alternative timeline. This would mean that the characters seen in the Nexus are not precisely the same as known from their universes, but effectively copies spliced off from the main timeline at specific points. This would explain the presence of multiple instances of the same character at any time. It would also mean that the characters' arrival in the Nexus would not impact their main timelines.

This would explain the presence of characters such as Arthas, who has apparently arrived in the Nexus prior to his death. If the Nexus were not taking place in an alternative timeline of sorts, Arthas would have to have been returned to Azeroth following his stay in the Nexus, and have given no sign of his time spent there.

The Nexus seems to be capable of augmenting participants powers, abilities and vitality. Participants are connected for the duration of the match, and grow in power as the Nexus deems that they have earned enough experience. This appears to reflect a substantial and pervasive control of all matter within the Nexus.

According to Uther, the Nexus "chooses" those who are drawn there.[2] This may be due to their power or valour in battle. Uther also claims that those chosen are summoned "to be tested in the forge of combat, and to achieve great glory."[2]

If this is an accurate statement regarding the Nexus' actions, this suggests that the Nexus is acting with a specific and purposeful intent. This could be to present mighty and indeed entertaining battles, for the enjoyment of unknown parties. Alternatively, the Nexus could be intended as some kind of test, either of individual strength or of a number of group variables. If Uther is correct, the Nexus may be intended as a great test of good versus evil, with the canon version of events seeing 'good' characters always pitted against 'evil' characters, as opposed to the mix of alignments encountered in actual games. It is also possible that the true purpose of the Nexus has not yet been revealed.

The Nexus' endless resurrection of participants would appear to show that the initiation and maintaining of ongoing battles is central to its design. The layout and construction of the realms may also reflect a conscious intent on the behalf of the Nexus to provide ideal battlegrounds (see below).

The Nexus would appear to be at least partly technological in nature. However, the exact origins of the Nexus and its many realms are unclear.

One explanation would be that the many disparate realms have been drawn to the Nexus in much the same way as the participants have been; chosen for unknown reasons, perhaps specifically in order to serve as battlegrounds. The very specific function and construction of each battleground may be taken simply as a convenience for game purposes, or could be considered proof of further development by whatever controls the Nexus itself.

For example, the technological sections at the far left and right of each zone are clearly not of the same origins as the rest of the battlegrounds. While a realm may reflect a medieval time-period, these areas feature advanced technology, and would appear to have been installed specifically for the purpose of hosting battles. The many towers and gates may well have been installed in the same way.

It is possible this ability to create and modify may extend to the realms' minions and even those who control each battleground. However, it is also possible that, like the participants themselves, these characters were chosen for their already impressive powers. It appears to be within the Nexus' powers to augment their capabilities, however.

While the Nexus as encountered in-game consists of a combination of realms, technological features, and a presumed controlling intelligence, this may not always have been the case. One possibility is that the Nexus as a cosmic storm was artificially created by an advanced species in order to enable them to gather warriors from across time and dimensions.

An alternative explanation would be that the storm itself was originally a natural phenomenon, which would spontaneously draw in realms from various dimensions. At some point, a species possessed of advanced technology was brought into the Nexus, and once there were able to construct technology enabling them to take advantage of their new location.

The power controlling the Nexus may also have various origins. While the technology encountered suggests its abilities are technological in nature, rather than magical or natural, it is unknown whether that power is fully conscious, or something more instinctive or automated. If the Nexus is controlled by a sentient consciousness, this may be an individual or a group, and may be organic or artificial in nature.

If the Nexus is controlled by an artificial intelligence - either following pre-programmed automations, or with a fully sentient mind of its own - this intelligence may be acting under the strict control of organic beings, or operating independently. The intelligence may even have outlived its creators, or perhaps witnessed their demise.

One outlandish theory would be that the Nexus is controlled by an artificial intelligence which was originally designed to allow its creators to engage in unending battle against one another. The technology may have one day experienced a fault, encountered a catastrophic cosmic phenomenon, or perhaps even grown too clever to wish to be controlled any longer by it masters; one way or another resulting in the death of all participants. However, once bereft of warriors, the artificial intelligence's programming may have required it to seek out fresh participants in order to satisfy its operating protocols.

The age of the Nexus is also an interesting point. The Nexus is at least several thousand years old, prior to the arrival of Raynor (and the start of the game itself). It is unclear whether the other warriors doing battle there have therefore been doing so for several thousand years already, or whether the battles taking place are a more recent development within the Nexus, perhaps due to technological developments. It is also possible that other warriors have previously done battle in the Nexus, and the current selection are merely the latest batch.