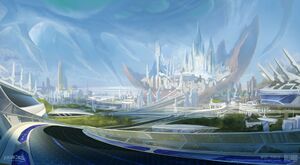 Neo-Stormwind is a Realm within the Nexus.[1]

Neo-Stormwind is a city on a futuristic version of Earth that features an ongoing battle between the mecha and kaijo. The Mechas are sentient fighting machines developed by humanity to combat the Kaijos, as well the mysterious Xenotech. Kaijo are a race of creatures that apparently had their origin in Tristram Labs, as the city's government utilized nuclear power. These monsters currently plague the continent of Africa, but some have been sighted at Neo-Stormwind.

The Caldeum Acropolis is a cybernetics-driven city in the same realm run by massive corporations instead of governments. The streets are ruled by the Azure Dragon, Vermillion Bird, Ivory Tiger and Onyx Turtle gangs, while the sinister Jigoku Cybernetics Corporation is planning something... evil down below. The Caldeum Complex skins seem at first like an entirely separate realm to that of Neo-Stormwwind, until the description for Cyber Oni Anub'arak confirms Jigoku Cybernetics based it off of the mech Cyb'arak, which was created by the Kaijoverse company Frozen Throne Technologies.

The reveal of the full story behind the company Jigoku also retroactively establishes Cyberdemon Zarya as being a part of this universe, as the name existed in that skin's flavor text ever since it launched.