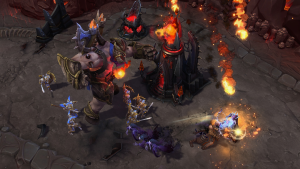 Monsters are battleground-specific and objective based creatures, such as the Skeletons on the underground part of Haunted Mines or the Skeletal Defenders that spawn on the Infernal Shrines.

Monsters are similar to wild mercenaries in that they are neutral enemies (Except for the Battlefield of Eternity Immortals, which have teams). However, unlike Mercenaries, Monsters do not spawn capture beacons when they die, instead giving some other reward (such as seeds or coins). Furthermore, certain talents that work on mercenaries do not work on Monsters.

Similar to everything else, monsters scale with minutes elapsed. The scaling patterns vary significantly more, with some monsters linearly scaling in the standard constant fashion, while others scale in the linear ramping style like mercenaries.[1]