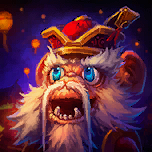 The monkeys had a 50% chance of spawning every match, provided at least one member of a player's team had yet to complete the daily quest that involved capturing them. They were similar to treasure goblins, but moved much faster, and took at least three heroes to capture him. Once a hero got within range, a red band would appear between them and the monkey. He could be slowed using abilities. If captured, he would drop an envelope holding 100 gold.