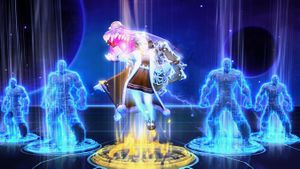 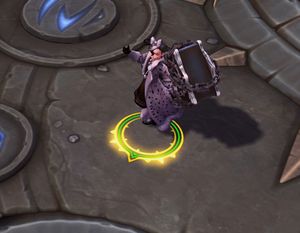 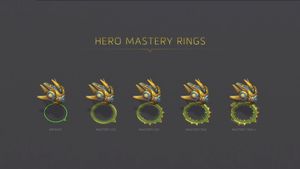 Hero Mastery Rings are a method to flaunt your dedication to the Heroes you own. These golden glowing Mastery Rings are permanent when purchased and will be placed over the top of the normal Hero Ring (indicating his collision radius), becoming visible to all players while in a match. Mastery Rings are purely cosmetic and don’t change the size of a hero’s hitbox in any way.[1]

Players are able to spend

Q: Can I get Mastery Rings for more than one hero?

A: You can get Mastery Rings for as many heroes as you like, given than you’ve reached at least level 15 with those heroes.

Q: Do I purchase these rings for each Hero separately?

A: Yes. These rings signify experience playing individual heroes and let other players know that you know how to play your chosen hero, so Mastery Rings are hero-specific.

When Heroes of the Storm first launched, Master skins were a type of skins that could be obtained only after a player reached Hero Level 10 with the respective hero. They had a price of

10,000 and could not be bought in other way. They were intended to help you flaunt your depth of experience and time investment with your favorite heroes.

However, when the developers re-evaluated master skins, they realized that Master skins created situations where players had to choose between unlocking a hero or unlocking a master skin, which was a battle that heroes won far more often. Additionally, once players purchased a master skin, they'd then have to choose whether to use it or another skin in-game. This meant they couldn’t visually display their prowess with a hero in-game if there was a non-master skin they liked better.[2]

Getting Master skins through progression was removed with Heroes 2.0 and replaced with Hero Mastery Taunts. Whenever you issue an in-game taunt (default: J)using a hero who has reached Hero Level 15 or higher that hero will now display unique "mastery" visual effects overhead. The hero will also play their taunt animation, as well as a random taunt-specific voice line for your hero. Their visual effects continue to evolve across several tiers, becoming more epic as your hero reaches new heights in the progression system.

On October 15, 2019, Tier 01 and Tier 02 Hero Mastery Rings were added as another way for players to show off their mastery of individual Heroes. On April 14, 2020, Tier 03 Mastery Rings became purchasable.