From Heroes of the Storm Wiki
(Redirected from Mana Regen)
Jump to: navigation, search 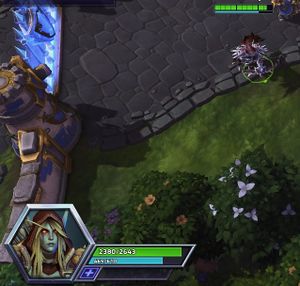 Mana is the most common resource heroes use to cast abilities. Underneath your green Health bar a blue bar shows your Hero's Mana supply. Using an ability requires you to have enough Mana to fulfill it's Mana cost. If a Hero starts running low of Mana, the number of Abilities he/she is able to use immediately drops (they’ll turn dark purple in the Hero’s Ability list). Mana replenishes over time, but not always quickly.

Heroes that use Mana start the game with 500 Mana at level 1 and gain 10 maximum Mana every level onwards. What this means is by level 20 mana users have a mana pool that is almost 40% larger and have over 60% more mana regeneration. Mana costs are constant, so as the game progresses mana becomes less and less of an issue. Some heroes can additionally increase their Mana cap through Talents.

A hero's Mana restores over time based on their Mana Regeneneration. Mana regen is passive and continues even when a hero is disabled. Mana regen is measured in mana per second. Mana regen can be increased by some talents. Heroes that use mana, except for Gul'dan and Probius, start with 3 mana per second at level 1 and gain .0975 mana per second every level. There are also some abilities that can refund Mana if their requirement is fulfilled (e.g. Medivh's "Arcane Rift" refunds some of the Mana cost if it hits a hero).

Some heroes don't use Mana at all or use another resource similar to Mana. Heroes that do not use Mana include Abathur, Auriel, Chen, Cho'gall, D.Va, Fenix, Illidan, Junkrat, Lt. Morales, the Lost Vikings, Murky, Samuro, Sonya, Tracer, Valeera, and Zarya.