Lost Cavern is a single-lane indoor battleground set in the realm of Luxoria. Lost Cavern is only available in custom games and Brawls.[1]

Lost Cavern eliminates Map Objectives and creates a slimmed-down play area in order to remain laser-focused on one constant, single-lane teamfight. The Hearthstones and Starting Area heals have been removed so that Heroes have no reason to fall back from the fight. Regeneration Globes spawns and brush, meanwhile, have been strategically placed around the lane to keep the fights active and interesting.[1] 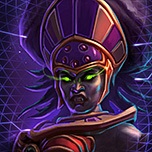