From Heroes of the Storm Wiki
(Redirected from Kings Crest)
Jump to: navigation, search 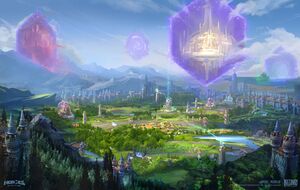 King's Crest within the Nexus

King's Crest is a realm of the Nexus ruled by the Lady of Thorns.[1] It is a fairy tale/storybook-themed land of tournaments, knights, squires, lords, ladies, and maidens. There are no peasants in King's Crest - everyone is very wealthy, and they have the finest pageantry and dresses.[2]

These lush and deceptively peaceful gardens have grown over time, covering the once molten realm known as Dragon Spire. Beneath this verdant paradise, the ancient power of the dragons was sealed away... and their descendants have neither forgotten nor forgiven the trespasses of those who wronged them.[3]

Once the royal gardens were a splendor to behold. But lately a shadow has fallen over them... Writhing tendrils creep across the grounds at night, and a number of servants have disappeared while walking its twisting paths. Queen Nightshade claims to be unaware of these incidents, but some are beginning to suspect she has gone mad.[4]