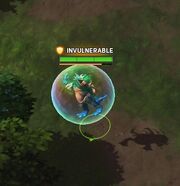 Invulnerable is a buff effect that makes the target Untargetable by enemy abilities and immune to damage and debuffs, except Time Stop, for its duration. Invulnerable also removes all existing debuffs including Armor debuffs and hero-specific debuffs like Jaina's "Chill", with the exception of aforementioned Time Stop. Abilities with delayed effect, like Kael'thas' Living Bomb, are also nullified, when Invulnerable is applied. Unlike Stasis, Invulnerable heroes can be targeted by friendly abilities.

The Core is Invulnerable and cannot be attacked until both Fort and Keep in one lane has been destroyed.