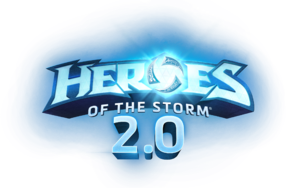 Heroes of the Storm 2.0 Logo

Heroes 2.0 was a major content Patch for Heroes of the Storm. Heroes of the Storm 2.0 brought the games first major Overwatch-themed content, a ton of other changes to the progression and reward systems to the game. The end result of this release was the highest player engagement numbers of all time, including the original launch of the game.[1]

On March 29, 2017, game director Alan Dabiri announced Heroes of the Storm 2.0, described as "a culmination of all the ways Blizzard transformed the Nexus since launch, plus plenty of radical additions on their way". A major feature of the patch was a revamp of the player and hero progression systems. The level caps (40 for players in general, and 20 for individual heroes) were removed, and the uneven experience curve for levelling heroes was smoothed out. Another feature was the introduction of Loot Chests which contain cosmetic rewards, similar to the system used in Overwatch. In addition to heroes, skins, and mounts, the chests can also include new portraits, banners, custom announcer voices (similar to StarCraft II), hero voice lines, and graffiti sprays (both similar to Overwatch). A loadout system for cosmetic additions was also included. The in-game shop was remodeled and retitled "Collection", and two new currencies were added in addition to the existing Gold: Gems (which can be earned in-game or purchased with real money), used to buy heroes, Loot Chests, and featured items, and Shards, awarded from Loot Chests and from duplicate items from Loot Chests. As part of the announcement, a new Diablo hero, the Amazon Cassia, was highlighted.

Starting with the launch of Heroes 2.0 in each region, and lasting until May 22, 2017, players could permanently unlock 1 of 4 Mega Bundles. Each Mega Bundle contained 20 Heroes and had its own theme: Assassin, Flex, Support & Specialist, and Tanks & Bruisers.

All players who logged in between April 25 and May 22 received 100 Gems, which could be used to permanently unlock 1 Mega Bundle of their choice. Once a Mega Bundle had been unlocked, the other three became unavailable.

At the center of Heroes 2.0 was a massive overhaul to progression so that it's more frequent, meaningful, and rewarding.

Heroes 2.0 introduced Loot Chests - packages received through progression or purchase that contain four random items drawn from nearly every reward in the game, including playable Heroes and Loot Chest-exclusive items. Now all the rewards the game had to offer became available to all players, including those who are strictly free-to-play.

Loot Chests contain a wealth of new cosmetic rewards: Taunt opponents with new Voice Lines, joke with teammates using Heroes Emojis, or have Abathur call all the action in a match? Logical decision.

The Heroes of the Storm in-game Shop was replaced by the Collection — a central location for purchasing new items, crafting cosmetics using Shards, and browsing and sorting through just about every item in the game. Customizable Loadouts allow players to gear up their Heroes so they inspire awe in allies and enemies alike.

Alongside Gold, Gems were added as a new virtual currency, which combined with Shard crafting provide all players with diverse options for acquiring playable Heroes and cosmetic rewards.