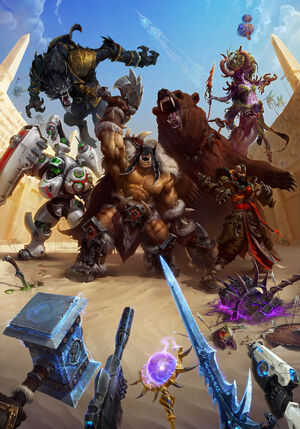 Heroes Brawl (formerly known as Arena Mode) was an action-packed game mode that aims to bring to players a fresh take on Heroes of the Storm by offering twisted rulesets, mutated battlegrounds, alternate hero selection methods, and as much frenzied team fighting as possible.[1] On September 8, 2020, Heroes Brawl was replaced by ARAM. Outside of a few crowd-favorites (Pull Party and Escape From Braxis), the weeks that the Brawl turned on an ARAM Battleground, the player numbers for the mode incresed heavily. Outside of the vast popularity differences, the older Brawl Battlegrounds were also too difficult to constantly update and maintain while continuing the work the developers wanted to do on everything else. These were the two major reasons that they made the decision to permanently give ARAM a home and sideline Brawls, at least for the time being.[2]

Heroes Brawl change each week. Provided players participate in at least two (rarely three) matches per week they will be rewarded with a Loot Chest and hero experience. If multiple heroes are used, the experience will be divided equally among them. Length of play time will vary depending on the brawl, ranging anywhere from a quick four-minute match to almost 20 minutes. AFK detection is present in Heroes Brawl. Players who become inactive during a Brawl will be disconnected from the match.

There are three kinds of battlegrounds: standard maps with mutators, brand-new arenas, and single-lane battlegrounds.