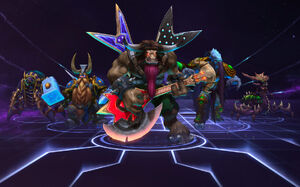 A lineup of heroes on the hero selection screen.

Heroes are the unique playable characters in Heroes of the Storm. A player chooses a single Hero, each having different abilities and Talents. Heroes can fight other Heroes and be slain, respawning in the Hall of Storms after death. They can also collect experience, increasing Heroes' power and granting them access to new Talents.

The Heroes are characters from the Blizzard Entertainment franchise universes of Diablo, Overwatch, Starcraft, Warcraft, and Blizzard Classic games (The Lost Vikings) and are divided into six different roles: Bruiser, Healer, Melee Assassin, Ranged Assassin, Support, and Tank. There are currently 89 Heroes in the game, with Mei being the most recent addition. Additionally, most Heroes can choose from multiple Mounts (some having special mounts) and have multiple Skins available for purchase in-game or through the free loot box system, with some forming a shared theme with other character Skins.

Every Hero starts with four Abilities, consisting of only three Basic Abilities and a Trait. All of these skills are available to use at the start of the game and can be customized through the Talents. At level 10, Heroes also receive a Heroic Ability chosen by the player, unique to the Hero. At level 20, Heroes can choose to upgrade their chosen Heroic Ability or pick from a few powerful other options. Abilities scale in effectiveness progressively as Heroes level up by gaining Experience. Abilities do not scale individually except through certain Talents.

Bruiser heroes are tough fighters that are capable of putting out some damage.

Bruisers are focused on survival with high damage output. There are currently 16 Bruiser heroes.

Healers are heroes that possess the ability to restore HP to allies and themselves by healing. There are currently 16 Healer heroes.

Melee Assassin heroes are high-octane damage dealers that get up close to their enemy to really lay on the pain.

Ranged Assassin heroes are fragile damage dealers that are able to attack their enemies from a safer distance.

Support heroes provide boosts and other benefits to their teammates.

Supports are heroes that provide some sort of utility through Shields or EXP gain. There are currently 4 Support heroes.

Tank heroes are formidable juggernauts that protect their team by absorbing attacks from the enemy and blocking their retreat.

Tanks are designed by their role of wading into combat, absorbing attacks from enemy heroes and blocking their retreat. There are currently 13 Tank heroes.