From Heroes of the Storm Wiki
(Redirected from Hearthstone (franchise))
Jump to: navigation, search

In Hearthstone, players can choose to play as one of nine legendary Warcraft heroes, taking turns to play cards from their customizable decks to cast potent spells, use heroic weapons or abilities, or summon powerful minions to crush their opponent.

Players can compete for glory and standing in the game's Ranked Play mode, battle legendary bosses from World of Warcraft history in adventure mode, or forge a unique deck of randomly selected cards in the Arena, and can complete quests and earn prizes to gain gold and powerful new cards for their collection, constructing formidable decks with which to do battle. Hearthstone is designed to be a quick and accessible card game, that nonetheless features substantial strategic depth for more serious players.

On December 4, 2016 Hearthstone dropped the "Heroes of Warcraft" subtitle due to ensure simplicity in the game title.[3] 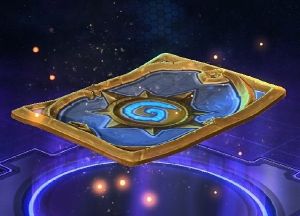 As well as sharing many characters from the Warcraft franchise, Heroes and Hearthstone also have some direct crossover in the form of promotional quests, designed to encourage players to explore both games.