From Heroes of the Storm Wiki
(Redirected from Hearth)
Jump to: navigation, search 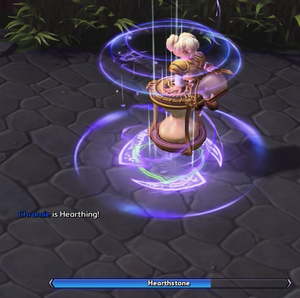 The Hearthstone allows heroes to teleport back to their Hall of Storms from anywhere on the battlefield. The default hotkey for hearthstone is: B.

After a few seconds of channeling, heroes will return to their spawn point. Casting Hearthstone takes 6 seconds. Moving, attacking, using an ability, or taking damage interrupts the channeling and cancels the teleport, meaning that heroes must find a safe place before using their hearthstone. Upon completion, the hero is healed for 1125 health, 150 mana, and starts regenerating an additional 8% (4 ticks of 2% per second) of their max HP and mana per second. Thus, in the early game, porting back to base instantly restores many squishier heroes to full health instantly, while for a level 20 Stitches, it can take over 10 seconds to regenerate to full HP from near 0.

Because it removes you from the action and has a long channel time, use it with care, as you may not make it back in time for a teamfight. Once a hero passes 2343 HP it starts to become more valuable to just walk back into the Hall of Storms than it is to port back, depending on how far that hero is. For an ordinary hero moving at 100% movespeed (the distance remains shorter than optimal mounting distance, even at the top end of real HP values), this is approximately the area between the core and the Hall of Storms. Each map has varying sizes of the base, making it functionally impossible to give a hard and fast rule. The best approximation is that, in the area that is considered “fountain dive” territory, it is more efficient for tanks and bruisers to just walk back into the Hall of Storms rather than press B, presumably because the last enemy diver has just been killed.[1]

The minimap visually indicates when allied Heroes are using Hearthstone to return to the Hall of Storms. Additionally, a chat message is displayed whenever an ally activates Hearthstone. This message does not display more than once every 10 seconds.

B-Stepping is a form of taunt and can be used as a bait. You just hold "B" and move with the mouse, if you want to spam it the Hearthstone animation.

You b-step to taunt people after outplaying them. That makes them want to chase and punish you for your hubris. It is often used to bait people under towers (for something like hook or octograb in tower range). Or if you escape a gank, you can purposely hearth in an unsafe position while your team waits in a bush. You can bait them into stepping forward to interrupt your hearth, at which point you surprise them from the bush for a turnaround kill.