"Welcome, foolish heroes, to the Haunted Mines. Here, death reigns eternal. Soon, the mines will open, and the terrors within shall awaken. Slay the undead, wrest their cursed skulls from them. In turn, I will summon forth my mighty bone golems. They will destroy enemies' defenses. So, do we have a deal?"[1] - The Grave Keeper

Haunted Mines is a two-lane battleground set in the realm of Raven Court with the Grave Keeper serving as the battleground announcer. On October 16, 2018, Haunted Mines was removed indefinitely from the game. According to Alex Neyman, the developers couldn't find a way to get it to the same level of fun that our other Battlegrounds could provide.[2] On April 30, 2020, Brett Crawford wrote: "We have some initial blue-sky ideas on things we could do to improve the gameplay of the battleground, but that is about as far as we have currently gotten. Just bringing it back in its current form is really tricky as there are a lot of bugs (many of them super edge-case) with the way the mines work that are very difficult to tackle and would require a major amount of resources to resolve. Overall, we love the map and all of its unique assets, and hope to return it to the map pool some time in the future!"[3]

Inside the mines, an Undead Army and a Grave Golem spawn periodically which drop Cursed Skulls when killed. Collecting Cursed Skulls empower your team's Bone Golem, with the team with the highest amount of Cursed Skulls, out of 100 available, having a stronger one. The Bone Golem, once resurrected, will walk down the lane smashing buildings and enemies until it's defeated. The first opening of the mines will activate 3 minutes into the match, following a 30-second warning.

Far from the Cursed Hollow, on the very borders of Raven Court, lie the Haunted Mines. Sealed beneath a shadowy graveyard, the undead clamor to be released from their earthen prison.[4]

The top forest level, has two lanes, on the north and south edges of the map, with four entrance to the mines: Two from the middle of each lane and one on each teams middle gate. 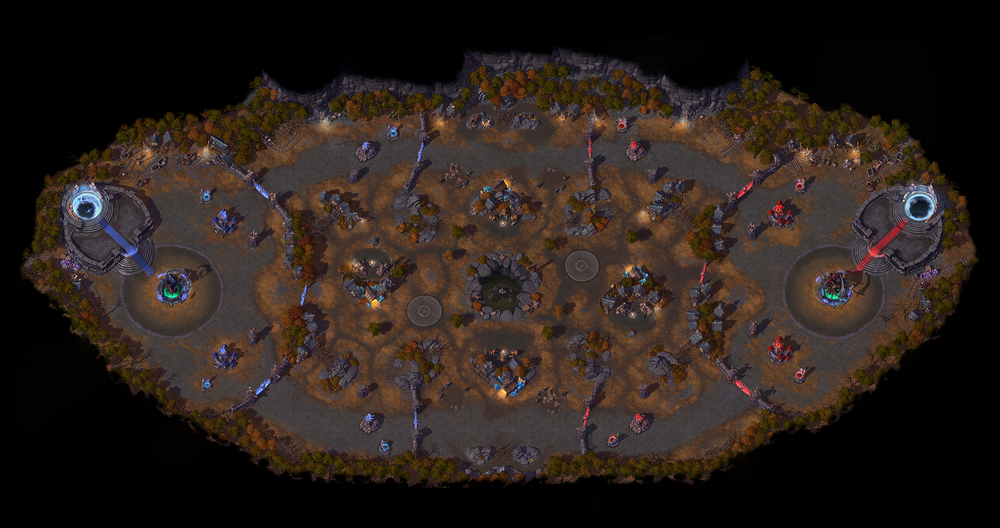 The bottom haunted mines level has four entrances at its north-western, south-western parts and near the middle gate of both teams. The entrance to the mines is closed until the undead first spawn inside, after which, the mines are kept opened. 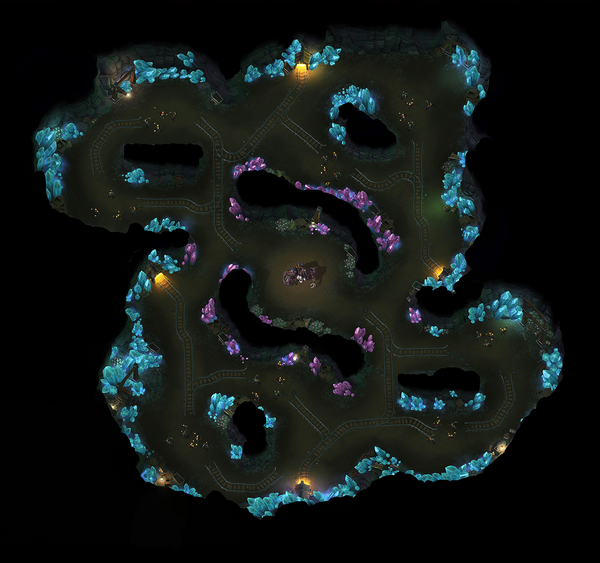 The unique objective revolves around collecting as many Cursed Skulls in order to summon the stronger Bone Golem. The more skulls your team collects, the stronger your golem.

The mines are closed until the first objective spawns 3:00 minutes into the game. The announcer will give a warning, 30-seconds before the first mines open. After that, the mines are remain open for the rest of the match.

Each objective phase will spawn an Undead Army (consisting of 8 camps) and one Grave Golem inside the underground area of the map. They will drop 100 Cursed Skulls in total. To collect Cursed Skulls, a hero will need to walk over them when they appear.

After the army has been defeated and the 100 Skulls are obtained - the total amount from both Teams must be 100 - Bone Golems will arise for both teams: One golem in the top lane and the other at the bottom. The initial Golem spawn is random. Subsequent Golem spawns swap lanes from the previous one.

Haunted Mines was released on March 13, 2014. However, the map was removed from rotation on November 17, 2015, but returned on December 14, 2016, having been redesigned. Before the rework, the Bone Golems were resurrected from the spot where they were previously killed. With the Golems both heading down predetermined lanes, you only had to worry about pushing one lane on this map. Being able to take a Fort before the Mines even open meant that when that first Golem spawned, it already marched on towards the Keep - making the map unbalanced.