Hanamura Temple is a large two-lane Battleground set within the Realm of Overwatch. Overseen by Athena, this map features a payload that periodically spawns in the center. Teams work to escort the payload to their drop-in point, which unleashes a barrage at the enemy's structures once it reaches its destination.

Hanamura is a well-preserved village of unassuming shops and quiet streets in Japan, known mostly for its idyllic cherry blossom festival every spring. But to those who know its history, Hanamura is the ancestral home of the Shimada ninja clan (to which Hanzo and Genji used to belong), which had grown over the centuries to become a powerful criminal organization. As its neighboring cities expanded, Hanamura was encircled, and eventually it was incorporated as a district within a larger city. For now, the imposing compound of the Shimada family lies empty, but that peace may soon be broken.[1]

Hanamura has two lanes with all of the objectives located at the top and bottom which sprawl towards the center of the map. 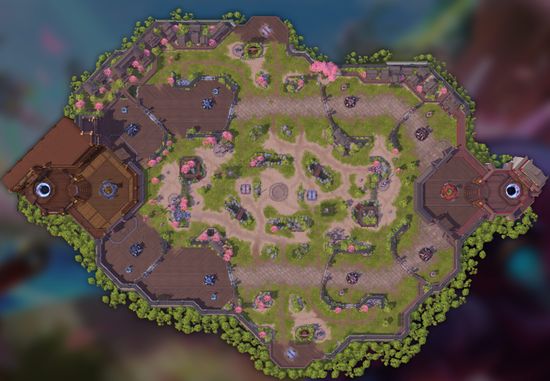 Hanamura was released in April 2017 and was a whole different map: On the first rendition of the Hanamura map, each team had up to two payloads that needed to be escorted across the map. However, because each team had up to two payloads at once, there could be potentially four different objectives happening at the same time. This was a lot to take in and people weren’t too fond of it. Upon reaching their destination, the payloads would fire missiles at the enemy core. The core itself was protected like Towers of Doom’s core.

Destroying enemy Keeps originally caused Sapper Minions to spawn with allied Minion waves, which fired on the Core upon reaching the end of their lanes. This generally spelled doom for the other team, as now they had to pay attention to their payloads, the enemy's payloads, the boss, and up to two lanes that no longer have any defenses. An update a couple months after the map's release (July 11, 2017) removed the Sappers. While this removed the aspect of adding another thing to pay attention to, it also made it so the only way to win was pushing payloads or defeating the boss. This was not a very popular design choice as it made sieging on the map feel futile. This led to games where one team would have no structures left and the game would come down to just brawling over the objective until one team won. This also allowed teams to drag games out indefinitely by refusing to push their own payloads while also preventing the enemy team from pushing.

Hanamura Temple was re-releasing in September 2018 with heavy changes: One of the first things the developers addressed was the core. "Simply put, attacking a Core feels good. Being able to get in to the enemy’s base and really finish the job is something that was sorely missing from the previous version of Hanamura. So, our priority was to open the Core area up to direct threats. This also helps to ensure that a team always has an idea of what they should (or at least could) be doing. Previously, if there were no payloads or mercenaries up, players kind of just stood around soaking and looking pretty. Now you always know that there’s something you could be doing to progress towards victory."[3]

While still a two-lane map, the jungle, merc camps, and objectives were all altered to support the increased emphasis on team fights. There is now only one single payload during objective times. It spawns in the dead center of the map, and both teams must fight over control and ownership of the payload. Additionally, the paths that the payload travels are team specific. The first payload you see on the Battleground will travel a relatively safe path in the center of the map, then head north or south to its destination. The path for your second payload is a bit more treacherous, taking you into enemy territory to score the capture. The third path is also dangerous and a bit longer to boot. Finally, once a payload is captured, it will attack structures in order of highest health with the Core as its final target.

In addition to those big changes, the developers changed the mercanary camps available on Hanamura. The old version of the map had Fortification Camps, Support Camps, and Recon Camps. Recon Camps dropped an item that gave limited vision instead of just being a capture point. The Support Camps and the Mega Enforcer (Boss) were removed from the map entirely. Instead, there are now Sentinel Siege Camps.