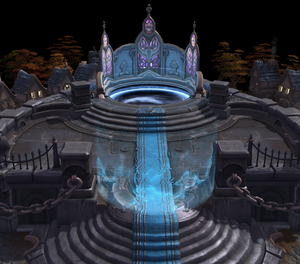 The Hall of Storms

The Hall of Storms (also called Altar) is the (re-)spawning area of all heroes on a battleground near their Core. It is not treated as a structure in terms of game mechanics, but is rather the area itself. Health and mana are restored by 8% (4 ticks of 2% per second) of his max HP and mana per second while within the Hall. Mount casts inside of your spawn are instant, and if you choose to arrive by Hearthstone, you will automatically be mounted. The spawn also offers protection from the enemy team when they are inside your base as they are not allowed to go inside of it. Running inside an enemy's spawn will cause you to be pushed back.

You can visit your spawn by running over, or by casting your Hearthstone, which will warp you there after a 6 second cast. Upon completion, the hero is healed for 1125 health, 150 mana, and starts regenerating an additional 8% (4 ticks of 2% per second) of their max HP and mana per second. Thus, in the early game, porting back to base instantly restores many squishier heroes to full health instantly, while for a level 20 Stitches, it can take over 10 seconds to regenerate to full HP from near 0. Once a hero passes 2343 HP it starts to become more valuable to just walk back into the Hall of Storms than it is to port back, depending on how far that hero is. For an ordinary hero moving at 100% movespeed (the distance remains shorter than optimal mounting distance, even at the top end of real HP values), this is approximately the area between the core and the Hall of Storms. Each map has varying sizes of the base, making it functionally impossible to give a hard and fast rule. The best approximation is that, in the area that is considered “fountain dive” territory, it is more efficient for tanks and bruisers to just walk back into the Hall of Storms rather than press B, presumably because the last enemy diver has just been killed.[1]