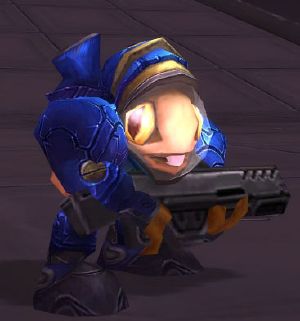 Grunty was a hero from the Blizzard Entertainment Warcraft franchise. He appeared in early builds of Heroes of the Storm. He has since become an alternative skin for Murky.

Grunty was sucked into a magic vortex and whipped across the dimensions when he battled a 25-man raid one Tuesday night. Deposited in the Koprulu sector, Grunty often finds himself among the zerg as murlocs are the only creatures the zerg have ever refused to infest.[1]

He was good at supporting heroes despite being classified as an agility, carry-type hero. He benefited from dexterity items but was easily killed. Grunty was similar to a stealth assassin from DotA with a ranged attack, rather than cloaking.