Once the royal gardens were a splendor to behold. But lately a shadow has fallen over them... Writhing tendrils creep across the grounds at night, and a number of servants have disappeared while walking its twisting paths. Queen Nightshade claims to be unaware of these incidents, but some are beginning to suspect she has gone mad.[1]

Garden of Terror is a huge map that consists of three lanes with relatively windy jungle areas and quite a lot of bushes to hide in. 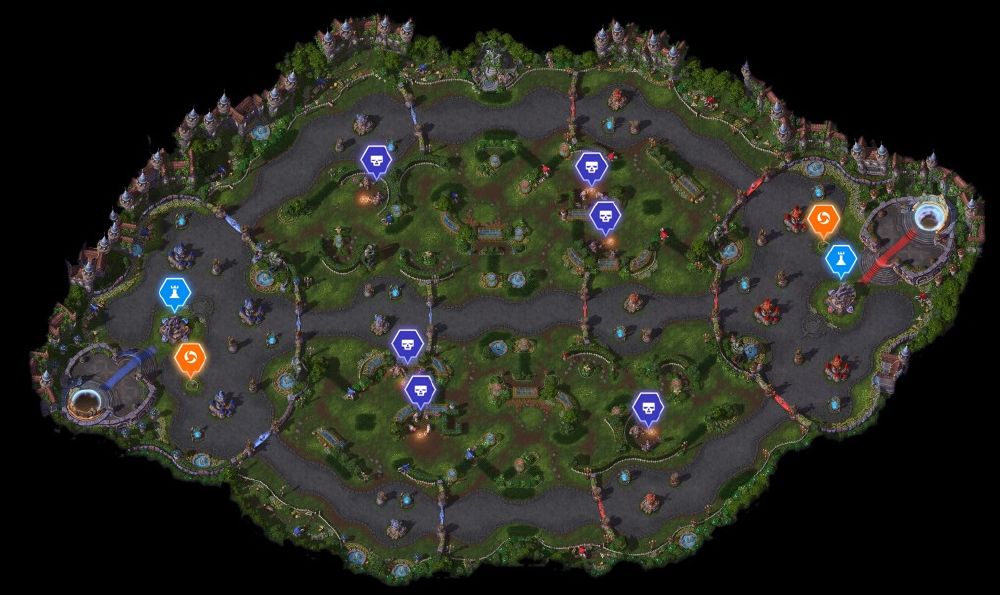 The first night starts 3:00 minutes into the match, following a 30-second warning. When night falls, the Shamblers will come out in the garden area of the Battleground. The minimap displays the location of all the night horrors with purple indicators. The night sequence will not end until all the night horrors are killed.

Besides a massive amount of health and power, the Garden Terror has two abilities: Overgrowth disables all enemy buildings around the casted area. Additionally, the Garden Terror does 200% extra damage to affected buildings. Be careful, as the Overgrowth can be destroyed by the opposing team. If you're sick of the enemy team clumping up and pulling off a wombo-combo on your team, Queen's Curse lets you turn them into slow, weak Plant Zombies. This is an area of effect polymorph ability that can definitely turn the tide of a fight, when used correctly.

Early on in development for Garden of Terror, the night cycle actually reduced player vision range significantly – this is a mechanic that the developers felt was interesting in Warcraft 3 and wanted to explore it. Ultimately, they didn't end up doing this for a couple of reasons. First off, it tended to result in more passive play, players were scared to move around the map without their team. It also set a more dreary and dark tone for the match.The development team felt that this could psychologically take a toll on the player.[2]

When Garden of Terrer went live on July 23, 2014, the Garden Terrors Overgrowth not only disabled all enemy structures, but also damaged all enemy buildings and minions around the casted area over time. Overgrowth essentially killed everything that is non-heroic. An unattended Overgrowth could nearly take down towers alone and took about one third of the health of a fort. This led to a common (and, usually, optimal) gameplay tactic of playing hit-and-run with the Garden Terror.