Garden of Terror is a battleground featuring seeds which can be collected to summon Garden Terrors. The first Battleground objective event will activate 2:30 minutes into the match, following a 30-second warning.

Once the royal gardens were a splendor to behold. But lately a shadow has fallen over them... Writhing tendrils creep across the grounds at night, and a number of servants have disappeared while walking its twisting paths. Queen Nightshade claims to be unaware of these incidents, but some are beginning to suspect she has gone mad.[1]

Garden of Terror is a huge map that consists of three lanes with relatively windy jungle areas and quite a lot of bushes to hide in. 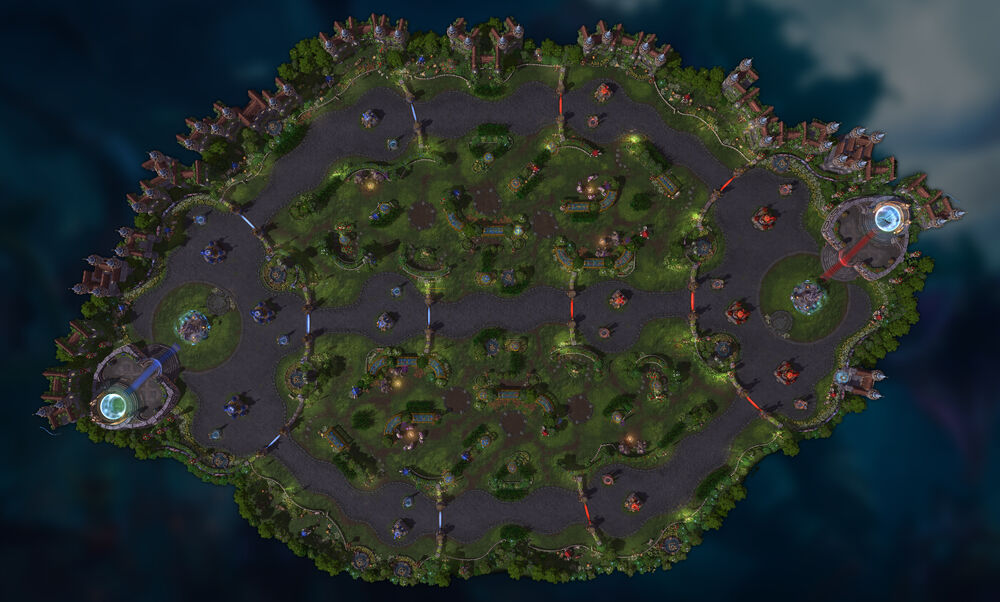 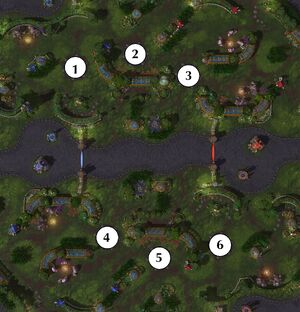 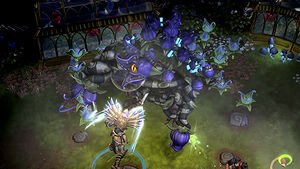 Collecting Seeds from a Flowering Shambler

On the original version of this map, players had to wait for periodic nightfall that awakened neutral shamblers throughout the map's jungle that they had to defeat to collect seeds. Once 100 seeds were gathered, a plant bloomed near the team's Core for a limited time. When channeled, the plant transformed the channeler into a monstrous vehicle called Garden Terror that exceled at destroying enemy structures, but only lasted for a limited duration. The Terror could place a Queen's Curse, transforming enemies who walked over it into small plants, cause an Overgrowth by planting a destroyable flower that prevented structures from firing, and Sprint for a boost in speed.

Early on in development for Garden of Terror, the night cycle actually reduced player vision range significantly – this is a mechanic that the developers felt was interesting in Warcraft 3 and wanted to explore it. Ultimately, they didn't end up doing this for a couple of reasons. First off, it tended to result in more passive play, players were scared to move around the map without their team. It also set a more dreary and dark tone for the match. The development team felt that this could psychologically take a toll on the player.[3]

When Garden of Terrer went live on July 23, 2014, the Vehicles Overgrowth ability not only disabled all enemy structures, but also damaged all enemy buildings and minions around the casted area over time. Overgrowth essentially killed everything that is non-heroic. An unattended Overgrowth could nearly take down towers alone and took about one third of the health of a fort. This led to a common (and, usually, optimal) gameplay tactic of playing hit-and-run with the Garden Terror.

On March 29, 2016 it was changed and Overgrowth no longer dealt damage, as chasing the Garden Terror as it ran between lanes dropping Overgrowths wasn’t enjoyable for the defending team, and didn’t fit the spirit of what the Garden Terror was intended to do. Instead, the Garden Terror dealt 100% bonus damage to Structures disabled by Overgrowth. The Garden Terrors Pilot was now incentivized to choose a lane, put down an Overgrowth and wail on buildings himself. This new functionality attempted to create a larger “moment” when Overgrowth was placed.[4]

Despite those changes Garden of Terror was reworked again in response to years of consistent player feedback (in community discussion and in the developers own user experience research) saying Garden of Terror was among the least-loved maps in the game. The goals for the rework were to preserve the map's thematic elements (seeds, shamblers, terrors, weather effects) while removing the elements that made so many players sigh when they saw the loading screen (chasing a vehicle around, eternal night phase, zero sum double vehicle phases, vehicle time-out).

The developers iterated on the Garden rework several times internally. First they tried small changes like repositioning/renumbering shambler camps, changing timers, and changing the vehicle's abilities and spawn point, but none of those changes made the map notably more fun or interesting. The map still had the same problems it did on live servers. Then they went wild for a bit with experimentation - at one point they had a completely new layout and a "siege vehicle" objective reward that could dig in, spawn bushes around it, spawn shamblers to push in a direction, and shoot out burrowing seed bombs that detonated for aoe damage. They tried a "gauntlet" type design where they spawned a series of seeds, one at a time, all over the map, and the first team to gather three won the objective. Those were interesting experiments, but they each had their own fatal problems.[5]

On September 25, 2018, Garden of Terror was finally re-released with heavy changes: The map no longer has a day/night cycle accompanying its objective, players no longer control the Garden Terror themselves, and the method gaining the Garden Terror has changed completely. After a team gathers 3 seeds, three NPC Garden Terrors spawn in the lanes. Those Garden Terrors can use Overgrowth to disables buildings and use an AoE stomp.