Our newest Heroes Brawl mode is Garden Arena: a best-of-three Arena match featuring the Garden Terror and its Shamblers. Gather seeds and overrun the enemies’ core with the power of nature![1]

Garden Arena is a Brawl in Heroes of the Storm. The goal of this arena is to collect 100 seeds from the shamblers spawned in the middle of the arena. Teams must work against the shamblers and the opposing team.

The first round of this brawl is a "day phase" map, there is a lot of faire-type activity and a very interactive stand of spectators that respond to hero actions, including kills. The second round is a "night phase" map, tentacled terrors can be seen, and there are a lower amount of spectators. The third and last round is an "underground" map has noticeable stalactites and underground rivers and pools. 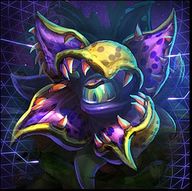