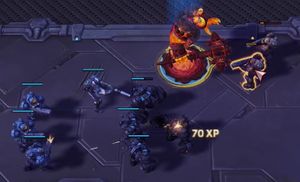 XP gained from killing a minion 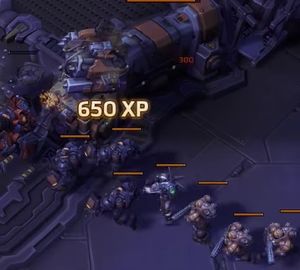 XP gained from destroying a Tower

Experience (often referred to as experience points or XP) is a measure of a team's actions in the current match. Floating text displays XP as golden numbers above the target's head. Experience is shared between all members of each team, and when enough experience is gained, all Heroes on the team gain a level. Each level gained increases a Hero's stats, and reaching level 4, 7, 10, 13, 16 and 20 grants access to new Talents (Chromie being an exception due to her trait). Heroes begin each match at level 1.

All experience in the game is gathered by individual heroes, but it's collected and unified into progress for the entire team. You don't need all fives heroes to be present for an experience event in order for it to be applied to all five heroes. You simply need one person to get it, and everyone benefits. That’s why it's only necessary to have one person soak a lane at any given time while others on the team roam. It's also why you don't need to “feed” a particular hero on your team to carry you, and kill-stealing is completely irrelevant. Heroes of the Storm is truly a team game down to its very roots.

If a minion dies in range of two people, that experience will not be counted twice for your team's total. All experience is only counted once, regardless of how many people are present. On the scoreboard, that experience will be divided by the number of people there, and the matching fraction of the total will be assigned to each player to show their contribution. That frees up the remaining players to make rotations and look for kills, something which is much harder to accomplish in traditional MOBAs where each player is responsible for their own experience acquisition.[1]

Every level raises a Heroes' Health, Damage and regeneration values. If a hero uses Mana, he/she even gains 10 additional Mana per level. For most Heroes, the increase of damage and hitpoints are 4% per level, but some heroes deviate from that. To rank up the level, a team needs to gather experience points. Experience points are a score that both teams accumulate from various sources with the sole goal of leveling up. Each team starts at the level of 1 and can reach level 30 at most. How much XP each team needs to collect for each level can be found in the following table:

This formula is aproximately the total xp needed ( 0-4% difference ) for level x. Only useable for levels above level 5:

Both teams passively receive 23 XP per second 35 seconds after the gates open at the start of a match. Destroying a Fort or Keep will provide your team with a stacking 20% (4.6 XP/s) increase in Passively-earned Experience.In terms of minion waves, it’s about one wave per 2:00.

Since both teams receive this bonus, it has only a small impact on the game, especially only in the early phase of the game. For example, on Cursed Hollow both teams may fight over the first tribute while being on level 3. But one team might just level up to 4 due to this constant XP income. Thus, in some situations it can give you an advantage to just delay a fight.

Gaining XP is done chiefly by soaking minion waves, which spawn every 30 seconds. The most fundamental strategy when it comes to experience in Heroes of the Storm is called "soaking".

Heroes who kill Minions with Abilities or Basic Attacks will automatically collect the experience from the Minions. Additionally, defeated minions leave behind Experience Globes that you can collect — with a generous pickup radius — to contribute to your team’s collective total experience. Experience Globes slowly move toward the closest allied Hero within 6 range, and are collected when an allied Hero comes within 1.5 range. Experience Globes will not move toward Heroes that are hidden in bushes or Stealthed, but they can be still collected by these Heroes if they move within 1.5 range. Once a Hero has revealed himself, Globes will magnet to them again.[2] So, for example, an Abathur will need to be in a visible spot in the lane or reveal himfself from the bush by using an ability in order to range-soak them.

A few Heroes have special interactions with Experience Globes:

All Mercenary Camps grant all Experience to the team that captured the camp.[4]

Another source for experience are the enemy structures on the map. Of all destructible buildings, only Towers grant a static number of XP when destroyed, regardless of whether a hero was nearby or not. Destroying a Fort or Keep will provide your team with a stacking 20% increase in Passively-earned Experience. Walls, Gates and Healing Fountains do not grant any experience.

Killing enemy players provides global experience for your team. Global means that the experience is awarded regardless of proximity, allowing something like a damage-over-time effect or long-range spell to kill an enemy from far away without penalty.

Hero-summoned units do not grant experience. Examples include Gazlowe's Rock-It! Turrets, Probius' Pylons, Zagara's Hydralisks and Roaches, and others. Some Heroic Pets however (like Misha), do grant XP.

A team that is behind the opposing team gets an "underdog bonus" for every enemy hero that is killed. The amount of bonus XP earned per takedown will scale significantly based on how many levels apart the teams are, and caps off at a four-level difference. Bonus XP will be granted for each takedown until team levels become even. Additionally, a team that is ahead in levels now earns fewer experience points for takedowns, and the effects work inversely. Likewise, this handicap ceases when the teams are leveled.[5]

The experience that a team accumulated in a match is completely transferred to the player’s Hero Level progress and for the player's profile in total. These pools exist outside of individual matches, and upon reaching certain levels unlock Loot Chests and other features. However, these levels are reached far more slowly than those during matches, with many matches rewarding less than 1 level in total. The current level and experience accumulated by each team is displayed at the top of the screen throughout each match. The levels and experience of the player's total profile and for individual Heroes can be seen on the profile screen. The amount is doubled when you are using a Boost and an additional 5% for each other player with a Boost in the game.