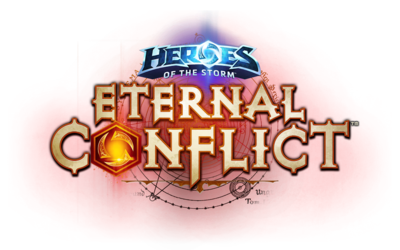 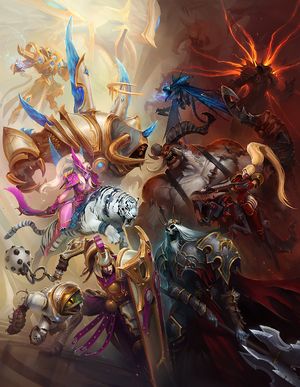 The Eternal Conflict[1] was a Diablo-themed event in Heroes of the Storm, taking place between June 30 and September 8, 2015.[2][3] The event added two battlegrounds, the Battlefield of Eternity and the Infernal Shrines; four heroes, Johanna, The Butcher, Leoric, and Kharazim; eight skins; and two mounts.

The event was available for testing on the Public Test Realm from June 23rd to June 30.

Angels and demons bring their eternal conflict to the Nexus, where bitter enemies may become allies, and vice versa, in a war as ancient as time. Great heroes collide on ageless battlefields, vying for the supremacy of the High Heavens or the Burning Hells. Only one side shall prevail—until the next match, of course.

Charge into the fray with new heroes and mounts; fight in challenging new battlegrounds; look your best with awesome new skins; and earn great glory—or gold—in a crucible of blood, fire, and... treasure goblins.[4]

During the event, the potential pool of battlegrounds was reduced, increasing the likelihood of doing battle on one of the new fields of war.

Heroes! The Nexus has been infiltrated by scores of miscreant goblins. They prance and frolic throughout, hauling large sacks of stolen gold. This will not stand. Daily quests have been posted, demanding that the Nexus’ denizens slay the dastardly looters on sight. Remember, the first goblin kill of the day will net some gold for your purse. Happy hunting![4]

Treasure goblins appeared in the start area of any group containing a player who had not yet completed their daily treasure goblin quest, but each player could only complete the quest once per day. The appearance of the treasure goblins was narrated by Deckard Cain, from Diablo.

With the 2015-08-15 patch, a second special quest appeared, rewarding players who killed a further 50 treasure goblins with a special portrait.

According to a counter on the official site, the Eternal Conflict event saw 15,193,660 treasure goblins killed by players.[4]

A special portrait was available for players who completed a special quest to slay 50 treasure goblins.