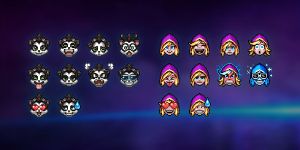 Emojis are cosmetic feature in Heroes of the Storm that allow players' to make chat much more expressive both in and out of the game. They are obtained by crafting

40 or via Loot Chests, with each hero having multiple emoji packs to choose from.

Each player starts with five basic "Nexus" packs. There are also emoji sets not particular to heroes, such as "celebration" or "food" packs. Players' Emojis will automatically convert to match the Heroes they are currently using, so long as they own that Hero's Emoji Packs. This will occur in-game, as well as after choosing a Hero during Hero Select or in Draft Lobbies.

Use Emojis marked as Favorites during a match by clicking the heart button to the right side of the in-game Chat bar. There are also some hidden emojis, available only by typing their shortcuts.

There are chat shortcuts for the emoji's to display, without having to type out the full name of an emoji.

If you are currently playing, or have selected, a hero in-game and own said hero's emoji packs, it will automatically use theirs instead of the default Nexus emoji. An example would be typing :) playing as Abathur, the chat automatically displaying it as "