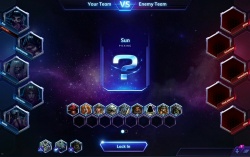 How you pick your hero in a Draft Game follows different rules from Quick Matches. Instead of just selecting your favorite hero and clicking "Ready", both teams go through a selection process called a Draft. In Draft Mode, teams alternately pick heroes.

The Battleground on which players will be brawling will appear at the top center of the screen. A coin flip decides which team goes first. Heroes are also banned; when a hero is banned it is no longer allowed to be chosen. Teams can only ban three heroes each, without any duplicates allowed.

During the initial ban phase, teams will alternate until each has banned two Heroes. The team that wins the coin toss will be prompted to pick one hero on the first turn, and then the opposing team will select two heroes. Teams will then alternate picking two heroes at a time until just one player remains on the team that lost the coin toss. Only the heroes that you own will be available to you during Draft Mode, and no purchases are allowed after a match has been found. When it's your turn to pick, you’ll have 30 seconds to lock in your hero selection. If the timer runs out before you’ve made a decision, your most recently highlighted hero will be automatically locked in, or one will be selected for you at random if you did not already have a hero highlighted.

Once a player on either team locks in a hero, no one else can select or play as that hero during that game. This is also why you must own at least 10 heroes in order to compete in ranked play. With nine or fewer, it's entirely possible that other players could snap up all of the heroes you own before you’ve even had a chance to pick. 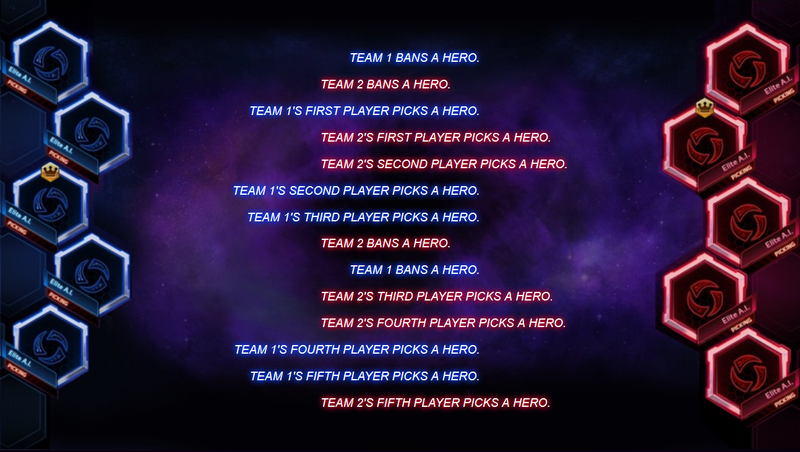 Enemies won't be able to see your chat messages in Draft Mode, so you'll want to communicate closely with your allies in order to build an effective team composition. Teams that communicate well during the drafting phase and successfully balance team composition against what heroes each player is comfortable with generally do better than teams that have no coordination whatsoever. Talk to your teammates, tell them which heroes you're familiar with, and watch what the other team is doing.If any player quits during Draft Mode, the game will be cancelled.[1]

Once the draft is complete, the match begins.

How to draft[edit | edit source]

Learning how to draft effectively is a big part of winning matches. Things that should be addressed during the Draft are: