The series is set in the fantasy world of Sanctuary. The three games in the series take place in similar geographic areas, with several common areas including the town of Tristram and the region around Mount Arreat. Additional setting is provided by the High Heavens and the Burning Hells, two separate realms with ties to Sanctuary. The series focuses on the battle between the humans living on Sanctuary and the Prime Evils, demons who are led by Diablo, the series' chief antagonist. The humans are occasionally aided by angels, notably the archangel of justice, Tyrael. The characters in the world of Sanctuary are primarily humans, angels, and various classes of demons and monsters.

The series has resulted in the publishing of several books relevant to the Diablo setting, covering a wide range of the timelines of the universe. There are also comics that explore various stories within the world of Sanctuary. 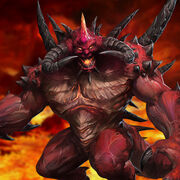 Diablo is set in the world of Sanctuary, created by the Archangel Inarius for angels and devils weary of conflict between the High Heavens and the Burning Hells. When unions between Angels and Demons created powerful beings called nephalem, the archdemon Lilith sought to raise these creatures as her servants and rule Sanctuary, leading to her banishment and the destruction of most of the nephalem. When Lilith returned, a farmer named Uldyssian-ul-Diomed stopped her by destroying the cults of both Inarius and Lilith, sacrificing himself to protect the world.

In an attempt to keep the Lords of the Burning Hells from taking over Sanctuary, the Archangel Tyrael captured the three prime evils: Mephisto, Lord of Hatred; Baal, Lord of Destruction; and Diablo, Lord of Terror. The prime evils remained imprisoned until Diablo, through contacts with mortals living in the town above him (Tristram), began bringing minions from Hell into Sanctuary. While a hero managed to slay him, the hero soon transformed into a new host body for Diablo's soul. With Diablo setting about in his new host to free his brothers, a band of heroes went after him, managing to slay all three prime evils. In the process, the Worldstone, designed to keep Sanctuary hidden from the High Heavens and the Burning Hells, was destroyed.

Eventually, Diablo achieves resurrection once again, this time in the body of his daughter. Through subterfuge, he manages to obtain the souls of all the Prime Evils. Containing those souls within his own, Diablo begins to assault the High Heavens and nearly destroys them before a new hero kills him and banishes him yet again.

There are currently 18 Diablo heroes in the game, including 5 Bruisers, 3 Healers, 1 Melee Assassin, 6 Ranged Assassins, and 3 Tanks.