From Heroes of the Storm Wiki
(Redirected from Damage over time)
Jump to: navigation, search 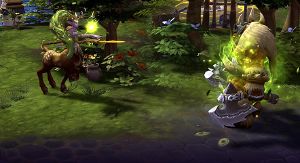 Lunaras Basic Attacks poison their target, causing them to take damage over time.

Damage over Time (short: DoT) is a debuff that causes the affected unit to constantly take damage until the effect expires, is cleansed, or the target moves to the Hall of Storms. Damage is dealt at the end of each interval, the first of which begins when the spell lands, and the amount the unit will take is usually shown on the health bar as grey health. Some spells come with an initial damage, which may or may not be equal to the periodic damage. DoT effects will not interrupt certain effects that require the hero not to take damage while channeling, such as mounting or taking an objective. Once applied Damage over Time effects persist until they expire or get removed, regardless of its caster's state. This is a distinct from effects that deal constant periodic damage such as Burning Rage.

DoT effects have different ways of stacking with other instances of the same DoT. Some abilities fully stack with themselves, gaining increased damage or effects with each stack. Most abilities have only partial stacking, with reapplication of the DoT simply refreshing the effect. There are a few abilities with no stacking at all, so the DoT cannot be re-applied while a previous DoT is already present on the target.

Damage over Time effects can be removed via Invulnerable and Stasis status effects, as well as few specific Abilities and Talents. Time Stop only pauses the duration of DoT effects.