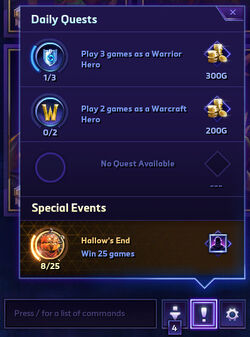 Quests are special objectives available to players. Completing the stated objectives will grant the player a reward, ranging from gold to special portraits.

Each player is awarded one daily quest each day at 3am PT. Players can have a maximum of three daily quests at a time. In addition to these, in-game events sometimes bring special quests.

Players can view their current quests and quest progress through the exclamation mark icon at the bottom right of the game menu screens.

Note: game played in any mode with Draft counts towards "play X games as *" regardless of hero type.[1]

The following is a partial list of special quests available during events. These do not occupy a normal quest slot but appear in addition to them.