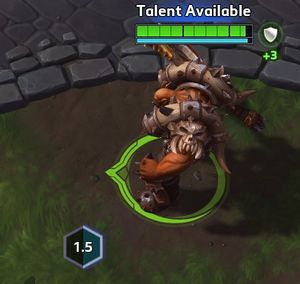 A Cooldown (or CD) is the minimum length of time that the player needs to wait after using an ability before they can use it again. They naturally recharge at the rate of 1 per second and you cannot cast an ability while it's on cooldown, but the game will give you an indicator on the ability itself or at the position of your mouses' cursor of how much longer you need to wait. Players can press ALT and left-click any of their Ability or Talent icons to quickly indicate their remaining Ability cooldown durations to teammates via chat messages.

Cooldowns are a major limiter in how often a hero can utilize their powerful abilities. Stronger abilities such as Heroics have longer cooldowns to give the enemy a chance to take advantage of the temporary loss of an ability. Some abilities will have much shorter cooldowns and a weaker effect, which lets the hero constantly have the benefits of the ability, but then the ability might be constrained by mana costs due to how often it is cast.

Many abilities will be set on a 10 second cooldown if they are interrupted during the cast time. The effect Time Stop completely halts the countdown of cooldowns. Many channeled abilities have an extremely short cooldown after activating to prevent them from being deactivated by pressing the button too fast.

Some abilities can hold multiple charges of itself allowing it to be cast multiple times in succession, such as Kharazim's Radiant Dash. For most of these abilities once the cooldown completes it fills a charge and must be completed again for each charge to refill. Some abilities like Genji's Shuriken refill all charges of the ability when the cooldown completes. These abilities generally allow for a burst in damage or utility that then slows down once the charges need to be refilled.

Abilities with a lasting or delayed effect (like Stitches both ultimate, blaze or alextrasza traits, ...) will start there cooldown once they are activated. There is few exeception to this rules like Abathur Evole Monstrosity which have his CD starting once the Monstrosity is dead.

Some talents increase the cooldowns of some or all abilities a hero has (like Tracer Total Recall).