From Heroes of the Storm Wiki
(Redirected from Channeled cast)
Jump to: navigation, search 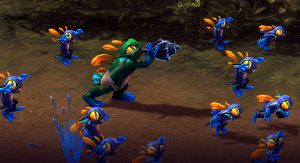 Murky channeling March of the Murlocs

A Channeled Ability is a type of Ability that requires a certain determined period of focus from the caster to bear fruit. Some abilities require a casting period before the ability is cast, while others require a continuous channel to maintain their effect. Most channeled abilities disable other actions until the channel is cancelled, interrupted, or its duration ends. There are many different channels but the 2 general ones are stationary and mobile, with some exceptions.

Channeled abilities can be interrupted by Stuns, Silences and Stasis effects. It is important to note that Time Stop effect, like Zeratul's Void Prison, does not interrupt channels, and will only stall them. If an ability is interrupted, or in some cases cancelled by the caster, during a channeled cast time, it is put on a 10 seconds cooldown (or the ability's normal cooldown, if it is shorter than 10 seconds). Otherwise channeled abilities will go on full cooldown once interrupted.

Abilities that have a delayed effect (e.g. Johanna's Condemn), abilities with a toggled or persistent effect (e.g. Kerrigan's Maelstrom) or abilities with cast time, which upon being interrupted does not initiate a cooldown, are not counted as channels.

Stationary channels require the hero to stay still in order for the ability to work. They are generally interruptable by hard cc such as a stun or silence, but are also interrupted by being dazed from a knockback. There are many abilities with a very brief casting animation, so only those with a recordable cast time are recorded here.

Mobile channels do not prevent the hero from moving and are never interrupted by dazes, often requiring hard CC such as a stun or silence to interrupt. Many of these are also unstoppable altogether.

These abilities involve entering portals to instantly teleport to its other end. These channels can be interrupted by Stuns, Roots, Knockbacks and Stases, but not by Silences.

This is a special category of channeled abilities that is composed of either out-of-combat abilities or map objectives. These channels are interruptable simply by taking damage that is not in the form of DoT or by taking any other action.