From Heroes of the Storm Wiki
(Redirected from Call of the Nexus)
Jump to: navigation, search 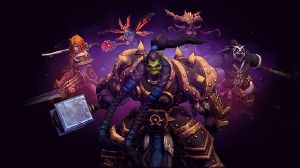 Quick Match is a gameplay mode of Heroes of the Storm.

This mode sets two teams of five human-controlled heroes against each other on one random battleground in Player-Versus-Player style combat. In Quick Match you select the hero you want ahead of time and are guaranteed to play that hero. Both teams might have the same hero (e.g. both teams might have Raynor). These teams are selected based on the player's past performance (a somewhat hidden statistic not available in-game) to create a level playing field, as well as the roles of heroes chosen. For example, if a player queues without other party members as a Support, they are extremely unlikely to be matched with four other Support teammates.

Playing in this mode will net you daily quest progress, as well as bonus gold and experience. Players who queue for Quick Match games using roles that are in short supply will receive 50% bonus experience for being team players. Just look for the “Call of the Nexus” Bonus Experience indicator located above each Hero when viewing the Hero Selection screen.[1]

The main purpose of Quick Match is that you have a guaranteed character selection, and matches that start as soon as possible. This is something the Draft Mode cannot offer. Quick Match is a place where you can try things out that may not always be optimal for what you would normally choose in a Ranked game.

Quick Match will do its best to make a good game using a large number of factors but while archetypes may be even, certain hero combinations may end up having an advantage/disadvantage that are partially related to whatever combination you may have done with your group, at what time you are playing or even in what region. If you and your friends queue up as 4 Supports and 1 Warrior at 2am, it can make things more complicated. You may have a solid comp for a map like Cursed Hollow but if you end up on Braxis with a sub-optimal top laner you're potentially looking at an uphill battle.

At it's core though, Quick Match isn't there to make the perfect game but just one that thinks is overall fair while allowing you to pick what Hero you want to play. It also allows you to build guaranteed compositions with friends if you are looking to execute a specific combo which is awkward to draft for or might not have the support of your teammates (Stitches/Medivh; Tassadar/Tracer; Cho'Gall + Ana/Auriel). If you are in the mood to win with a "real" composition on a map, Unranked Draft or Ranked Draft might be better.[3]

Regardless of the above, there are some guidelines for the Matchmaking. All those guidelines can however effect queue times, so they can be bend by the system. 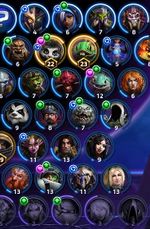 Heroes with the Bonus Experience icon.

Call of the Nexus[edit | edit source]

Call of the Nexus is a Quick Match feature that allows players to see which heroes are currently on high demand by the matchmaker. Selecting and playing these heroes grants the player 50% more Hero XP after the match and their queue times are generally lower. Call of the Nexus is indicated by a green up-arrow in the corner of the hero icon in the hero selection screen.