From Heroes of the Storm Wiki
(Redirected from Boss)
Jump to: navigation, search 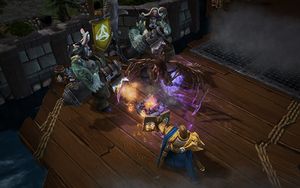 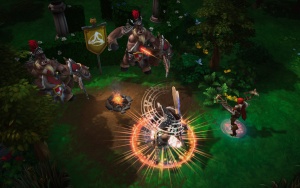 ETC and Valla attempt to enlist a pair of siege giants. 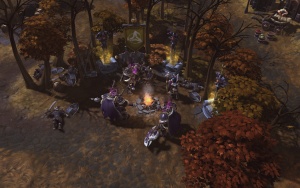 In addition to the various objectives each Battleground offers, you'll also be able to earn the allegiance of the Mercenaries who populate the world. To do so, you must first defeat the neutral mercenaries at their camp site, and then stand on the beacon nearby to capture them for your team. When defeated, they grant mercenaries that aid your team's minion waves, pushing against enemy forts. Determining the optimal time to capture a mercenary camp is crucial, and can be of great value when you need to distract the enemy team from capturing an objective.

Mercenary camps spawn at various points during a match. Once a camp has been captured, a respawn timer will begin, at the completion of which the mercenaries will reappear, ready for capture once more. Mercenaries do grant a experience when they're captured by your team.

Most Battlegrounds feature powerful, neutral creatures, known as Mercenaries. These Mercenaries can aid your team by advancing down the lanes and attacking minions and fortresses, and there are yet other kinds of helpful Mercenary Camps which offer different bonuses.

Mercenaries, such as Siege mercs, Bruisers, and Bosses can help sow confusion for the opponent when objectives become available. Timing a Mercenary assault in this way will give pause to enemies who will then need to choose between clearing the incoming Mercenaries, or contesting the objective. Additionally, splitting the opponents’ defenses can help in a big push against opposing fortifications, as well as give your team more vision, and more control over the map.[1]

Mercenaries are not won by simply defeating the camp. You must stand uncontested for a few seconds on the beacon that spawns after clearing the neutral mercs. If you don’t, a keen opponent can steal the camp away from your team.

Mercenary Lord is a Generic Talent that both granted durability against enemy Mercenary Camps and empowered those that you claimed yourself. The damage reduction makes capturing mercs significantly easier, especially bosses which are affected by the damage reduction. The bonus damage only applies when you are within half a screen-length of the mercs, but can provide a huge boost in pushing power and presence, and is shown by the mercs growing slightly larger in size, but does not affect bosses.

All Mercenary Camps grant all Experience to the team that captured the camp, it does not matter who did damage or killed the camp.[2]

Captured mercenary camps do not grant experience to the opponent when killed.

When Should I Be Doing Camps?[edit | edit source]

You should never take any camp without having a reason for doing so. Obviously, it’s less risky to take camps on your side of the map (safe camps) than it is on your opponent’s side (not-safe camps). Sneaking enemy camps almost always ends in tragedy, so it’s in your best interest to refrain unless your team is on the same page.

Ask yourself this series of questions every time you consider taking a camp:

Before level 10 you should not be doing camps if you do not have a member of the team soaking in every lane. You must have a person in each lane for every waking moment of the laning phase, because it is very important to capture as much experience as possible on the battleground as fast as possible.[3]

There are several types of mercenary camps, some only found on certain themed battlegrounds. Each is displayed with its own difficult rating, indicating the challenge of defeating the mercenaries found there. Some camps share similarities which give them an over-arching type, such as Siege camp, Bruiser camp, and Boss camp.

Siege mercenaries are destructive mercenaries that are weak if attacked by heroes and are the easiest camps to take, but if left alone in a lane they can clear waves and sometimes take structures.

Bruiser are tanky units that take longer to capture but are excellent at fortifying creep waves, making them a strong addition to any push or a distraction for enemies to waste time on.

These are the biggest, baddest mercenaries you can capture. Not all maps contain Boss Camps and there is only one Boss per camp, but that one Boss does a lot of damage with each swing while also possessing a huge amount of health. The high health and high damage of the Boss, however, means that you'll need multiple heroes to take it down. This makes you particularly vulnerable to ambushes while fighting a Boss, which is why their spawn location is known as "the throw pit", so only attack them when you have a level advantage or some opposing heroes are dead in order to make sure it will not be stolen from you. Once captured, Bosses auto-attack structures and can use abilities on minions and heroes (Archangel besides using abilities on minions and heroes, use auto-attack on minions too). A Boss cannot have buff abilities be cast on it. Also, they cannot be slowed or stunned, being unstoppable. If left unchecked, a Boss can literally break down walls and towers - even a keep - almost all by itself. Bosses cannot be captured by using abilities like "Bribe".

When a Reward Camp is captured, an item is dropped, which can be picked up and used by a hero. In addition, a large amount of experience is awarded to the team.